In Her Own Words - Diane 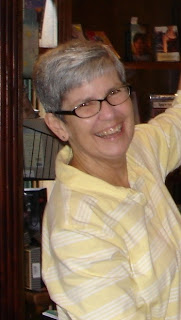 As we celebrate the third anniversary of the Women's Writing Circle this month, I asked women to share what they had discovered after being part of our community of writers, and include a favorite memory of the Circle. So from now until the end of November, we feature "In Her Own Words." Here is Diane Yannick's story.

"About three years ago, an article in the local newspaper, the Daily Local News, caught my attention. It was about a lady named Susan Weidener who had started a women’s writing group.

The word "memoir" caught my attention along with the notion that women would hear each others’ voices. I decided to show up. Reassuring myself that I had to attend only once if I didn’t like it, I entered Wellington Square Bookshop and nervously took my seat.

Now three years later, I enter Wellington Square on Saturday mornings with a more confident step. I take a deep breath, turn off my cell phone, get my coffee and take my seat among a group of women I’ve come to love.
We wait, comfortably chatting until Susan lights our candle to signify the start of our sacred time. Someone accepts the "talking stone," a smooth flat stone which we pass around the Circle when a woman wants to read. As she holds the stone, we listen to her words and feel the power of our combined voices. We are women searching for ways to “fill our papers with the breathing of our hearts.”
We don’t try to impress one another. We don’t need to apologize for our shortcomings. We just dig deep and lay our lives and dreams on the table. Gradually, the layers of our selves peel away. We cheer each other on, celebrating whatever is. 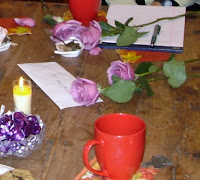 There was one particular moment when I realized the power of our Writing Circle. It was about six months after I joined. I had struggled with my piece and wasn’t sure that I was going to share that day. As usual, I got caught up in the moment and wanted to add my voice to the mix. In a shaky voice, I began to share my writing about my mother’s death. Rather than a  tribute to her, it was filled with regrets about the relationship we never had. I admitted that I didn’t cry when she died. I felt terrible that I couldn’t feel the human emotions that a daughter is supposed to feel about her own mother. It’s hard to even admit the feeling let alone try to find words to describe it.

Now, I’d said the words aloud.
When I finished, I was afraid to lift my eyes off  the page. No one spoke. I finally looked up. I saw a tear in the eye of one of the ladies I had met only a few weeks earlier. She smiled at me as she rubbed her eyes. Then I felt a hand patting my back. That minute changed me as a writer. I realized that I didn’t have to be ashamed of my feelings. I didn’t have to pretend that I was a better person than I really was. I could just be me.  That would be enough.

Since then, I have seen other tears and heard some belly laughs. It’s not quite so shocking now but the wonder remains. With grit and determination we show up and throw each other lifelines. Originally, I told myself that I was writing my life stories to pass on to my daughters. I’ve come to realize that’s untrue. I write because that’s what I need to do. I write to feel. I write to be more human. I write to quiet my mind so that I can truly hear." 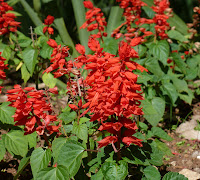 Diane,
Thank you for letting us into your world of what brought you to the Circle and what keeps you coming. I am fortunate to have the ability to attend the Circle and love seeing you there. Coming with Flo is an added plus. I can't say enough about you or the Circle. I feel blessed to have you both in my life.
Jan

Thanks for sharing what the Circle means to you. Our Circle is incredibly blessed to have you as a member. Don't forget about our NY trip...oh yeah I'm still in.

Wow. Powerful. I'm sure you know this Diane but you are very lucky to have such an amazing group to share your writing and your life with.

Also I totally understand about the missing mother connection. Me too.

You, your words, and your life experiences highlight the importance and value of the WWC. Thank you. Thank you for not giving up.

Diane,
I, too, did not cry when my mother died. Thank you for sharing your experience--you helped me get comfortable with mine.

Susan and Diane thank you for sharing this...candles and talking stone..what calming images for the tortured writer's soul. I love the idea, Diane, that you are in part writing your stories to pass on to your daughter.

Well said. The writer's life is tortured. A solitary endeavor, so hard, although not in your control because you have to write, just like you have to breath. The wonder of the Circle is that we all understand this, we come together as a community to ease the loneliness of the writer's journey, support, stimulate and jumpstart new writing.