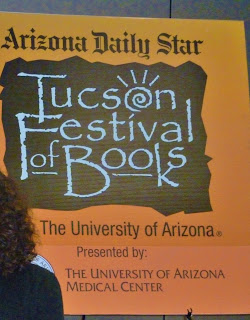 I had the fortune of attending this past weekend the Tucson Festival of Books at the University of Arizona where authors, writers, readers and book lovers come together for the weekend.  Now the 4th largest book festival in the country, TFOB offers a dizzying array of writers from all genres, panel discussions, workshops and table after table under bright white tents of books for sale.  Last year, the two-day Festival was attended by 120,000.
When writers reflect on writing, it is always interesting . . . what makes it more so is the dynamic, ever-changing nature of the publishing industry and how writers and authors are responding.
While many of the presentations were about writing, several focused on the power and importance of author promotion and social media. Three traditionally published authors on a panel discussion about the craft of writing made it clear that while their publishers were urging them (begging might be the better word) to take an active role in marketing their books on Twitter and Facebook, they were either not inclined to do so, or did it half-heartedly.  Said one author, “There is a certain inauthenticity and falsity to it . . .  and hawking your books like that is grim.”
As might be expected at another panel discussion, an indie author spoke about the “fun of meeting new people, making connections and holding free giveaways of books to entice new readers. I love Twitter," she gushed.
As an indie author with a background in professional journalism, the truth lies somewhere in between for me. Promotion does at times feel uncomfortable; a necessary evil. That said, I tend to lean more toward the advantages of social media, and how it can build relationships with readers and other writers.

One of my favorite panels was entitled “writing your memoirs” by John Elder Robison.  Robison grew up in the 1960s before the diagnosis of Asperger’s syndrome existed.  The author of the New York Times bestselling memoir, Look Me In the Eye:  My Life with Asperger’s, Robison is the brother of Augusten Burroughs, author of the memoir Running With Scissors.

When asked how you know if your story is something people will want to read, Robison answered:  “Tell it in an engaging manner, write about a subject that is broader than you and give it a message.”  True stories, he went on to add, are more "powerful" than fiction.
Memoir writers are best served by traditional publishing houses, he contends, since they help protect authors from potentially damaging libel suits.  Protected by a Random House legal team, for example, authors can "breathe easy," since "people will sue you for anything,” he noted.
Robison cautioned memoir writers not to sugarcoat or spare details, especially the unusual or not so flattering things about family members.  Writing about that “crazy uncle who robbed a store,” might “hold a clue” for future generations as to what runs in families, including mental illness.
For those writing memoirs as a family legacy, but not interested in formal publication, he recommended, the Mormon’s Family History Library, which archives family genealogies in perpetuity for free.
Robison claims memoir is probably a “more marketable” genre for unknown authors; selling a true story, he said, is a lot easier than selling fiction.  He also encourages all memoir writers to take a screenwriting course.  "It is invaluable to see how writing your memoir might be turned into a movie script." 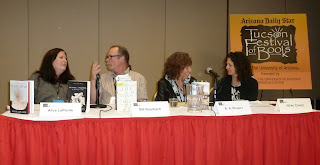 Another interesting author . . . mystery novel  writer Alice LaPlante.  After going through an MFA program and teaching creative writing at Stanford, LaPlante said she was "always told" to write “literature.”  But writing a mystery novel  -  in this case, about a murder suspect with Alzheimer’s – proved not just a fun exercise, but a way to get in touch with her deeper feelings about her own mother, who was dying of the disease.  Her novel, Turn of Mind, was a bestseller.  “Writing a novel gave me a beginning, middle and end . . . a way out,” she said of her own pain associated with her mother’s illness. 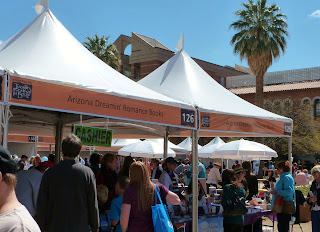 A final footnote . . . I did get to hear actor and author Ted Danson read from Edward Bridge Danson: Steward of the New West,  written by Ted’s nephew, Eric Penner Haury.

Danson's father, Edward “Ned” Danson Jr., anthropology professor at the University of Arizona, was involved with the National Park Service Advisory Board and the Western National Parks Association. Danson’s reading interspersed with his own personal memories of his father and growing up in Tucson were heartfelt and entertaining.

The Jodi Picoult lecture was scheduled immediately after the Danson reading and by the time I got to that was sold out. Jodi Picoult is one of my favorite “chick lit” authors and being shut out was disappointing.  In the future, I hope Festival promoters and organizers make it easier to attend lectures by “headliners” by not scheduling them so close together.
Posted by Susan G. Weidener at 8:53 PM

Thank you for bringing us Tucson this morning. The festival sounds wonderful. You are very fortunate to have gone and I know you will be sharing with the WWC what you've learned about the craft of memoir. Have fun!
Jan

Jan, You're welcome. I think our own social media workshop was as good as anything I got out here. And our writers are as good as many featured here, not to mention, our workshops even better and more in-depth. The fun of this was being able to pick and chose from an assortment of writers' panels and genres . . . seems that YA (Young Adult), Paranormal Romance and mystery writing were the most popular! The memoir event by Robison, tho, was packed and standing room only . . . evidence of the interest in memoir writing.

Giving us an 'on-the-spot report' from the frontlines there at TFOB made for wonderful reading, Susan. You can take the girl out of newspapers, but you can't take the journalism out of the girl. I love it! Thank you. From your blog and pictures, I feel I was right there walking among fellow writers and book lovers. Thanks for the tips, too!
Edda

Hi Susan, I'm with Edda, I felt like I was right there with you! I am intrigued by your highlights, especially Robison's comments about traditional publishing serving memoir writers better due to legalities. I'm giving a lot of thought to the legal issues with my own memoir.Also , the idea that memoir is easier to sell than fiction if you are unknown. That's the first time I've heard that but it may be due to the growing interest in real-life stories. That's good news!

It sounds like you are having a fabulous time and will return filled with inspiration and ideas to share. Enjoy the scenery and sunny skies and thanks for sharing!

Hi Edda and Kathleen, The Festival was intriguing. I don't agree with all that Robison said, but I do believe - and always have - that selling a memoir is easier than selling fiction . . . that is, until you make a name for yourself and then I think you have the platform to branch out because people are familiar with your work. Thanks for the kind remarks about "once a journalist, always a journalist." It is so true and I always credit my journalism background with learning how to tell a compelling story.

Thanks for sharing a bit of your Book Festival adventure with all of us! I was interested in the conversation about authors and social media. This medium offers another dimension to our relationship with our readers and maybe even another window on our own writing. Thanks for connecting us with the energy and richness of the Festival! Safe Travels, Ginger

Ginger, I think that is an excellent commentary on how social media can be a plus to an author. I can't say, tho, that I was surprised by the negativity of the traditionally published authors I heard at the Festival and how they did not appreciate the "reaching out" that social media represents . . . and how in the balance it can benefit them as writers. The changing dynamics of the publishing landscape make all authors entrepreneurs whether they want to accept it or not.

Susan, thanks for letting me tag along to Tucson via your descriptive review of your time there. It must have been energizing and fun to mix and mingle with so many writers.