The Everyday Stories of Family Life 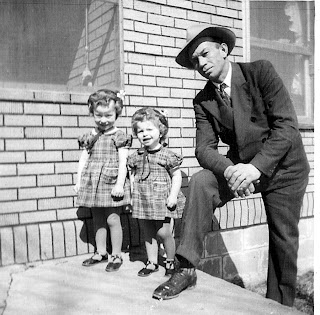 Many memoirists write about their parents, yet weaving a story of who they are  into the fabric of family history and a way of life takes special skill.

I was intrigued after hearing about  Carol Bodensteiner's memoir of growing up in a farming community in the Midwest.  I always loved the special simplicity that is the rural way of life.  As a journalist I had interviewed many farmers who recalled the days of early rising, milking cows, tilling fields, attending one-room schoolhouses.  As development pressures increased, many sold their land.  Cornfields were replaced by housing subdivisions and corporate parks. Carol's memoir of bygone days in a farming community sounded wonderful, a true slice of Americana.
Her memoir shows us how writers can turn the ordinary days of their lives into a story shimmering with charm, nostalgia and universal appeal.  Here is my review of Growing Up Country: Memories of an Iowa Farm Girl.  It is with great pleasure that I welcome Carol to the Circle.

I did not have an extraordinary childhood. Not in the blow your mind, Angela’s Ashes, bestseller memoir sense.  I grew up on a small dairy farm with my mom and dad and two sisters, cows, chickens, pigs, a dog, and a barn full of cats. We could not have been more average. 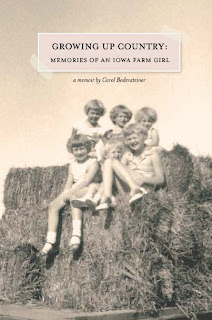 The days of my life were tied to the cycles of milking cows (twice a day, 365 days a year), putting meals on the table (7 a.m., noon, 6 p.m.), and the seasons of the year (planting and harvesting). I grew up like most farm kids, working hard and not knowing any different.

When I first set out to write, my thought was to write about my parents’ lives. So I interviewed them, writing in a journalistic style the stories of the jobs Dad had during the Depression, of Mom’s experiences teaching in one-room country schools, of their first years on a farm with no electricity and no indoor plumbing.

I must stress that these were mundane stories. About 4-H projects and making hay and doing laundry. About going to church every Sunday and eating fried chicken for Sunday dinner. In the early days of writing these stories, I did not imagine that they would ever become an actual book.

When I told my mother I was a business writer, not a creative writer, I wasn’t just stalling. I didn’t have the first idea how to write creative nonfiction. But the more I wrote, the more interested I became in learning the craft. I began to take workshops. I thrived in the environment, becoming a bit of a workshop junkie. Each summer I found myself in Iowa City attending the Iowa Summer Writing Festival. During the rest of the year, I found workshops offered in basements and churches. I devoured them all.

The workshops were invaluable and I could have continued signing up, but then I heard a speaker say, “Sooner or later, you have to just shut up and write.” Fortunately, my writing buddies were in the same place. We’d learned enough. It was time to write.

We sequestered ourselves for a week-long retreat and every day committed to turning out a new chapter. It didn’t have to be polished, it just had to flesh out the core of a new chapter. At the end of the week, we each had five new chapters. Amazing! We continued to meet through the year, encouraging each other along.


When I finally had enough stories to constitute a book, the publishing bug bit me. I shopped my memoir around to small and regional publishers. Uniformly, they thought the stories were nice but because there was no “character in conflict,” they did not see the book as commercially viable. 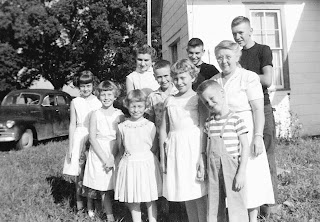 I moaned to my writing group. One of them pointed out that there was a way to restructure my childhood stories into adult drama by building off my divorce. I could see at once that she was right. I also knew that that version of my stories was not one I could put in my mother’s hands.

I elected to publish independently. I hoped others who also enjoyed growing up country would like the stories, but I was prepared for the possible reality that my mother would be the only one to read the book. Regardless, I committed to writing and producing the best book I could.

It’s been a surprise and a delight to find that my everyday stories of farm life have found a niche among readers. The stories capture a time in history and a way of life that people want to remember. They prove that every story doesn’t need to hang on high drama. They prove that the ordinary can be extraordinary.

Some lessons I take from my memoir writing experience and continue to apply to the novel I’m writing now:

In the top righthand corner, is a photograph that Carol describes this way: 1951 - Ready for church on Easter Sunday -  L-R My older sister Jane (4), me (2 1/2), and my dad Harvey Denter. I'm guessing it's Easter because that's the one day we'd have worn hats. I'm a little surprised, we aren't wearing white gloves!  Dad always wore that hat to church. And church was the only time he'd have worn a suit.

And in the lower lefthand corner: 1956 - First day of school at Fairfield Independent one-room country school. Kids in school that year came from three families - Four Lehmkuhls (in the back), two Scheckels, and three Denters. I'm second from left. My sister Sue is the smallest girl and my sister Jane is standing next to our teacher Miss Fowler. Miss Fowler was my teacher from kindergarten through 7th grade. We all went into town school the year I was in 8th grade.

Technically, our school had more than one room. There was an entryway, which is right behind us, where we hung our coats and stowed our lunch boxes on a shelf. Also in the entryway, there was a crockery water jug that we pumped water for and filled each morning. We were also quite lucky to have indoor toilets. They walled off the end of the school to add these toilet rooms. The toilets were just like outhouse toilets except inside. When you used the toilet, you wrote your name on the blackboard outside the door and erased it when you came back out. The school wasn't insulated and let me tell you, those toilet rooms were cold in the winter, but still better than going to an outhouse.

Carol Bodensteiner is a writer who finds inspiration in the places, people, culture and history of the Midwest. After a successful career in public relations consulting, she turned to creative writing. She writes regularly for The Iowan magazine www.iowan.com and blogs about writing, her prairie, gardening, and whatever in life interests her at the moment at www.carolbodensteiner.com  She published her memoir Growing up Country in 2008 as a paperback and as an ebook in 2011. She’s working on her first novel, historical fiction set during World War I.

Growing Up Country: Memories of an Iowa Farm Girl is available in paperback and ebook from: