Stories of Women of the Southwest 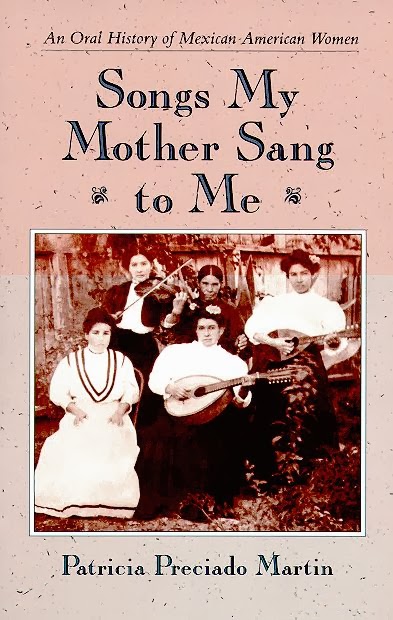 As a former journalist, I identify with the importance of first person accounts to document history.  I also appreciate how valuable it is to "set the record straight" when it comes to damaging stereotypes of people and cultures. So when I met Patricia Preciado Martin, I felt an instant affinity with her work.

As we sipped coffee, Patricia and I talked about her books, her oral histories which focus on the Mexican American heritage in the Southwest and stories of her mother's and grandmother's generation.  Our meeting place was a Mexican adobe house dating back to 1856.  An important historic landmark in Tucson, it now serves as Cafe a la C'Art near the Tucson Museum of Art. Patricia's journey as a professional writer began when she was 40. It took her five years to write her first book Images and Conversations. Now over three decades later, she has received numerous awards for her oral histories and short stories. Please welcome Patricia to the Circle. ~ Susan

My writing journey began when I began to make up stories for my children while we were on extended camping trips. A big influence in my life's direction was Margaret Maxwell, a professor of Library Science at the University of Arizona who encouraged me to write about my Mexican American culture. I wrote a folk tale called “The Legend of the Bellringer of San Agustin” which won a prize from the United Nations “Year of the Child” writing contest. It was published in 1979 by Pajarito Publications of Albuquerque New Mexico. This led to my interest in collecting local folk tales and subsequently to collecting the oral history of the Mexican American community of Tucson and Arizona.

My three published oral histories, my family, friends and the people I have interviewed have been an inspiration for my three collections of fiction short stories. The themes of my books all have to do with the history, culture, and traditions of the Mexican American community of which I am a part. I have always been interested in the connection to the land – our beloved land and the people needed to know our connection to the land. One woman I interviewed was 101 years old. What a rich source of information and memories she was.

I hope that my readers will get a deeper understanding and appreciation of the history, culture, strength, power, beauty and historical presence of the Mexican American community of the Southwest—“El Norte”. 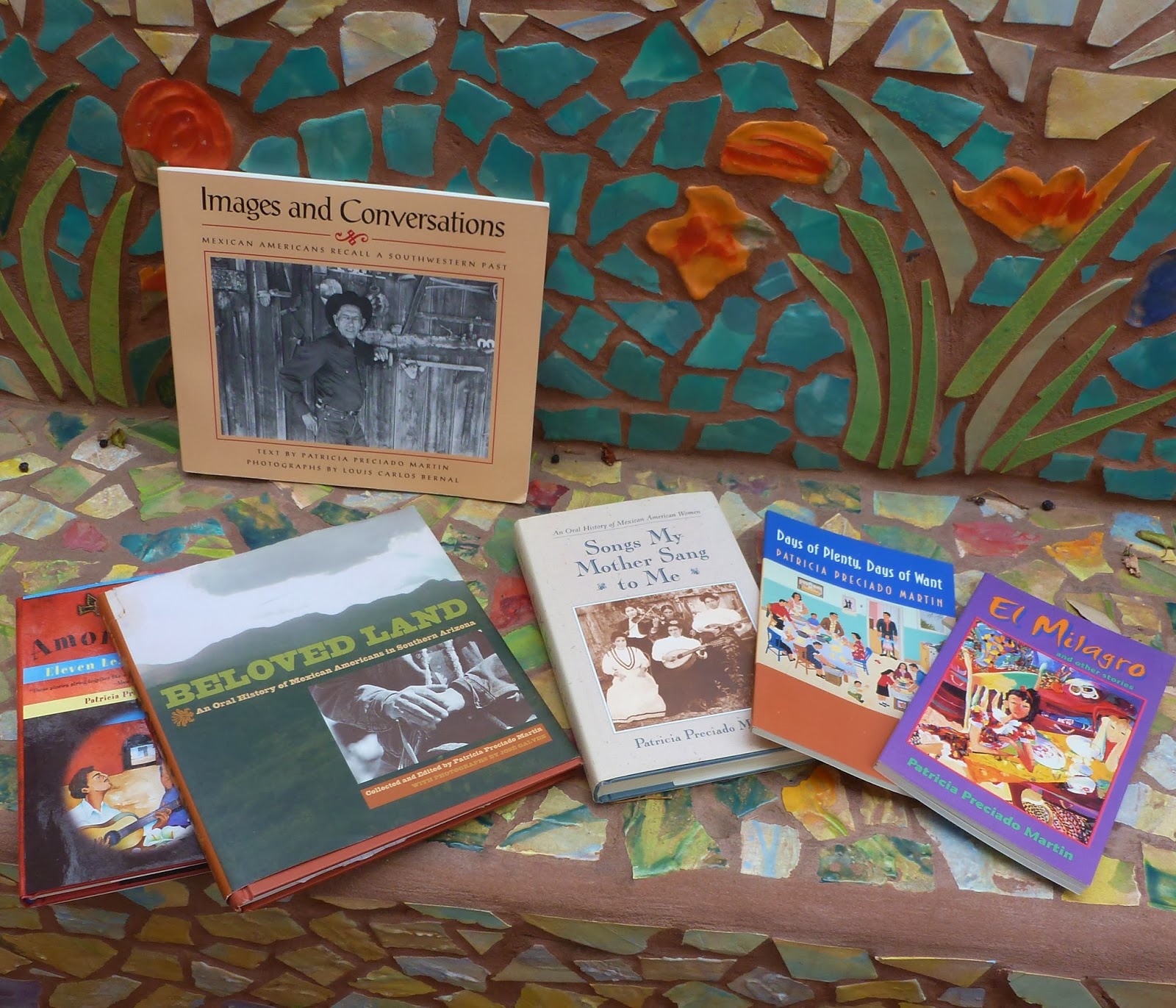 There are many stereotypes and problems with discrimination that our Hispanic communities have experienced and it is my hope and goal that my books will influence greater understanding and acceptance and appreciation--and even love!

One of the stereotypes that most annoyed me was that Mexican American women in stories and movies fell into either one of two categories. She’s either the “puta,” hot-blooded with a rose in her hair, or the ancient one, with rosary beads who is kind of superstitious. There was nothing in between. I got so upset I decided to write Songs My Mother Sang to Me. I interviewed 10 women of my mother's and grandmother's generation who ran the gamut from artists and journalists to seamstresses and ranchers. The stories they tell are so powerful about their communities, their fathers, and their religion. I’m not asking for anything special, just equal time to tell our stories. (Patricia recorded all her interviews and still has the tapes.)

Writers who are interested in conducting oral history should be versed in the background of their subjects. Research and study in the subject matter one is interested in are necessary before one begins to conduct interviews. It helps in my case that I am Mexican American, bilingual, and a member in good standing in my community. Networking has been an invaluable tool for me.

Once I finish a story, it is hard for me to begin another. But it’s not the job of the muse to show up, it’s my job to show up and write. I’m happiest in my garden. In order to write, you have to think. I'm currently working on a short story.

NOTE FROM SUSAN:   For a month this winter I stayed in Tucson. The sojourn was intended as my own personal writing retreat, but along the way I got to meet writers and authors of the Southwest.  Special thanks for arranging this time with Patricia goes to friend, fellow writer and environmental consultant Melanie Mizell of Tucson.

Are you working on a family legacy memoir or documenting the history of a person or place? Please share your comments. 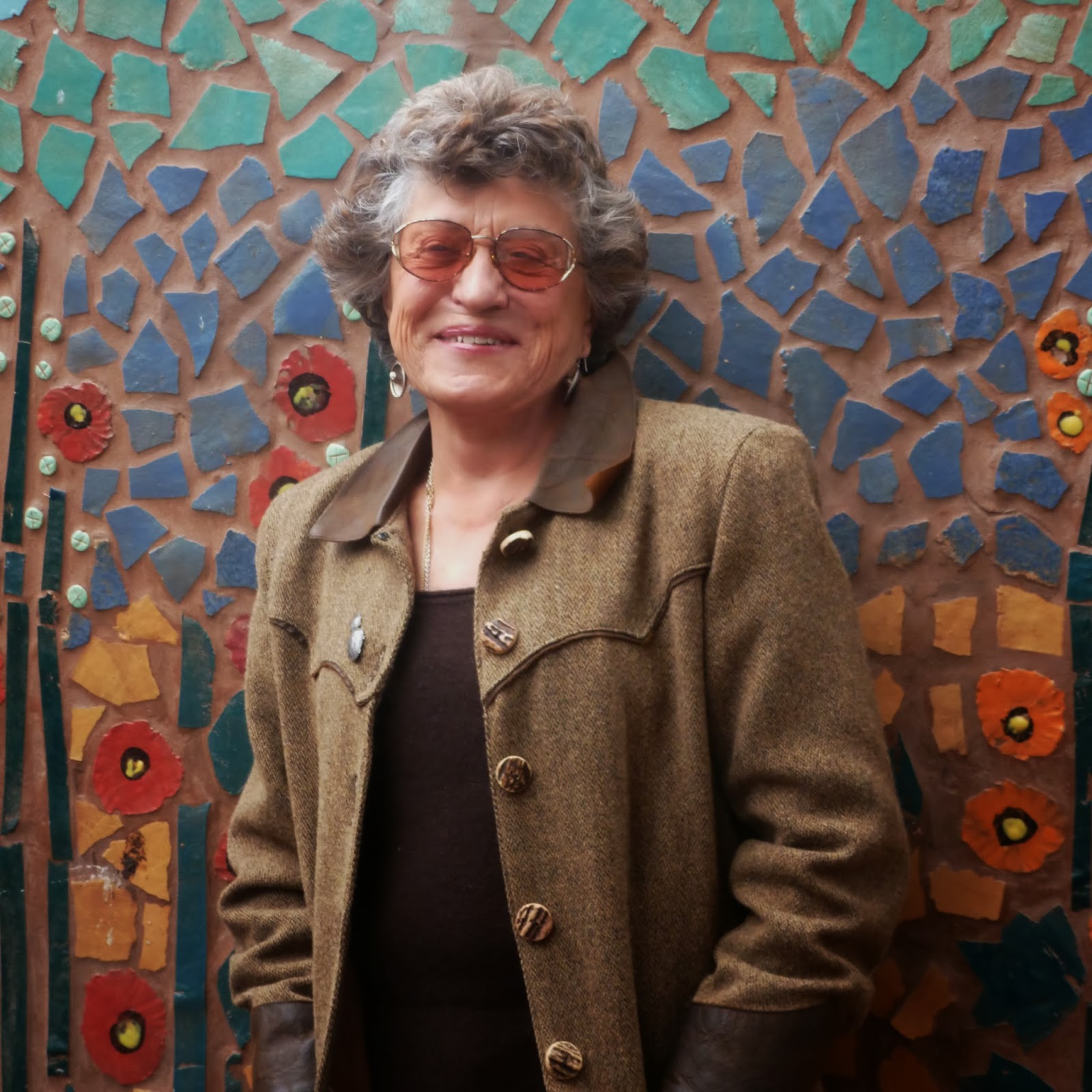 Patricia Preciado Martin is a native Arizonan and lifelong Tucsonense. She is a Magna Cum Laude graduate of the University of Arizona. Patricia has spent the last 30 years documenting the history and culture of the Mexican Americans in Arizona through her nonfiction and fiction. Her published oral histories are: Images and Conversations: Mexican Americans Recall a Southwestern Past; Songs My Mother Sang to Me; An Oral History of Mexican American Women; and Beloved Land: An Oral History of Mexican Americans and the Land. Her three collections of prize winning short stories are: “Days of Plenty, Days of Want”; “Amor Eterno: Eleven Lessons of Love”; and “El Milagro and Other Stories”.

All of Patricia' books have been published by the University of Arizona Press. Patricia has received many honors including: The Arizona Humanities Council Distinguished Public Scholar Award; The Sharlott Hall Museum Women's Hall of Fame Award and The Hispanic Alumni Association Distinguished Service Award. Patricia lives in Tucson with her husband Jim whom she met while serving in the Peace Corps. She is currently working on another collection of short stories.
Posted by Susan G. Weidener at 7:45 AM