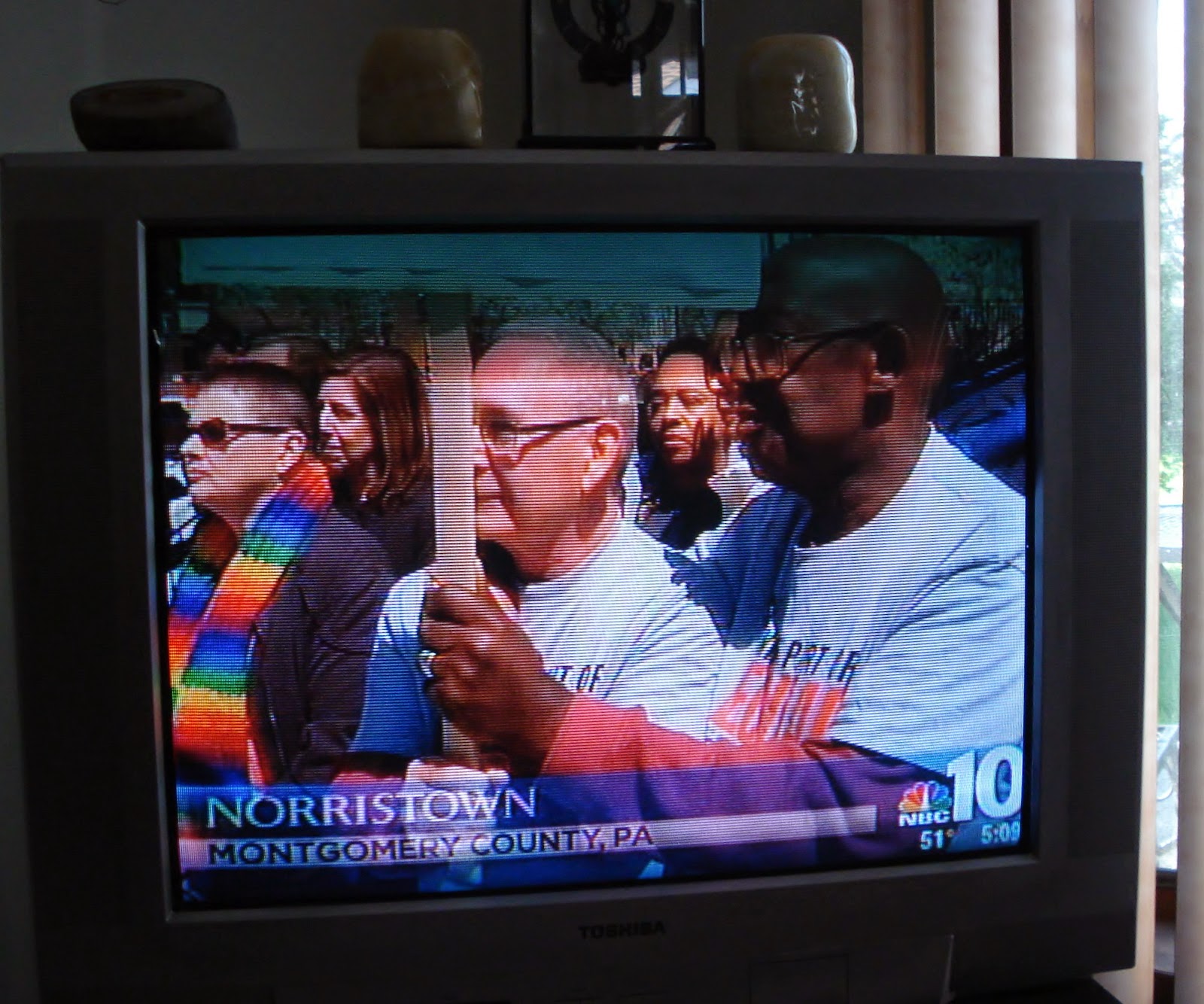 Since the inception of the Women's Writing Circle, Jan Backes has been sharing her words through memoir and poetry. The authenticity of her voice has been one of the great treasures of our writing circle and her work-in-progress memoir about addiction, bipolar disorder and gender identity is testament to her courage as a writer, which I have personally watched grow stronger over the years. Now she shares this moving memoir moment on the timely topic of marriage equality. Please welcome Jan.  ~ Susan

It was my first political rally. Figuring I would be able to fade into the crowd, I gladly said ‘yes’. 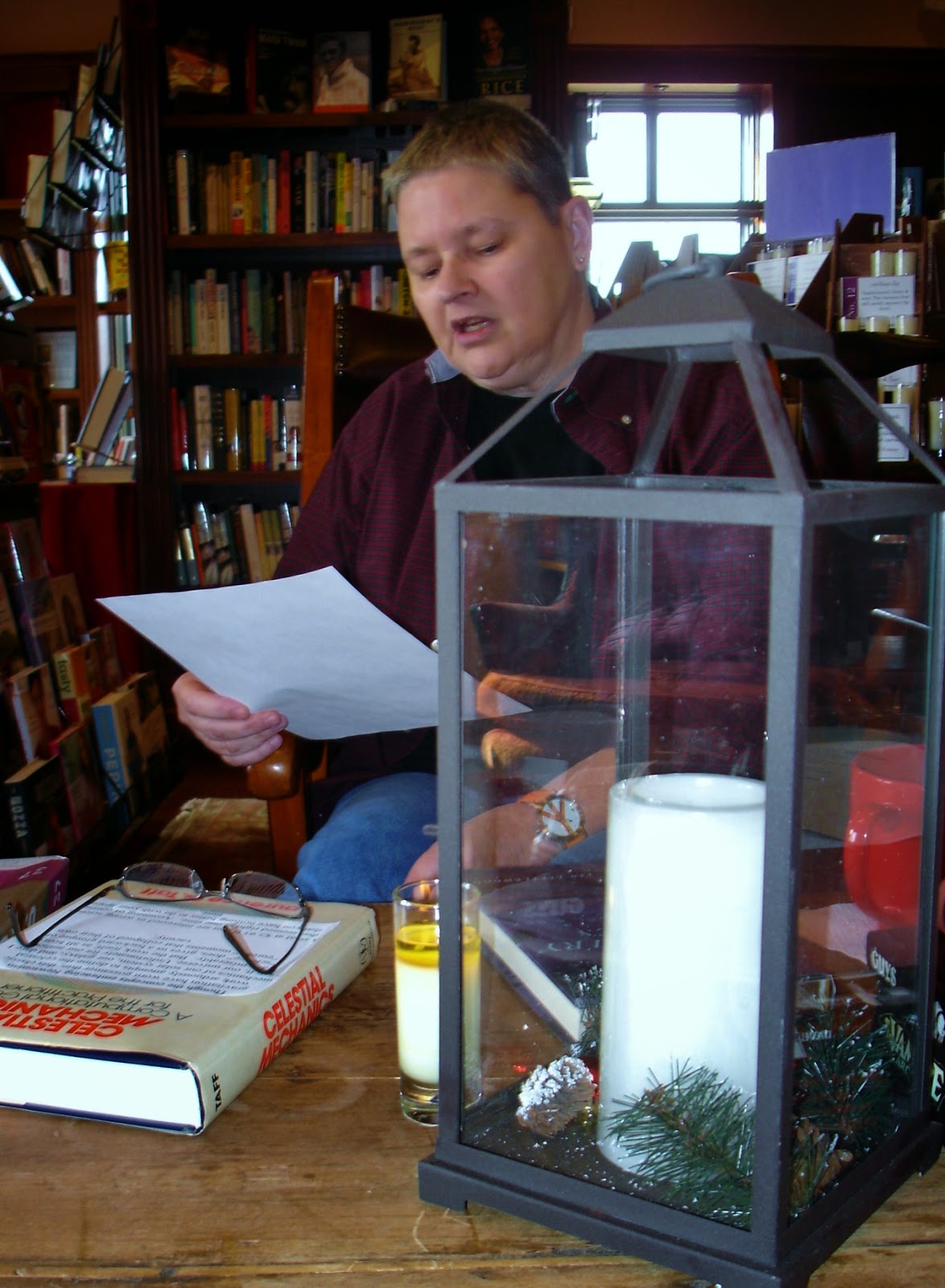 When we got there, Phil, Bryant and I rode around the courthouse to see where the event was being held and saw nothing, not even a podium. Where were the others? A woman who introduced herself as Michelle was the only member of the LGBT community waiting for the rally to begin. “Are you here for the event?” she asked. We chuckled since I had on the most colorful rainbow scarf in the world. Michelle went up the street in search of a group. Finally, Andy, the rally coordinator, arrived carrying the podium and another person who said she was the rally planner stood with him on the courthouse steps.

At 11:15 a.m. I phoned three local Philadelphia news stations. I was pumped and wanted us to get local coverage. When I saw Channel 10’s van pull up to the courthouse, it seemed a beacon of hope. We would get the word out.

Others began arriving. A bi-racial male couple stood to my left holding a sign that read: “We were married on August 11, 2013 in Pennsylvania. When is PA going to recognize our marriage?” Behind me stood an African American female couple holding their marriage certificate. Folks in my line, facing the cameras, seemed to be in their 50s, as were most of the other supporters.

None of us was interviewed, however, we all stood strong and silent together. Phil held our church banner and Bryant helped hold a banner stating: “Standing on the Side of Love.” We stood on the side of love. We spoke for all the people who supported us and couldn’t be there.

Our politicians knew we stood for something too. We stood for all the folks in this good state who are being denied full protection under the law. Until Marriage Equality is realized, I will stand and lend myself to this worthy cause. Anywhere I have a voice. And that is everywhere.

We held our banners aloft in the chilly April wind. The planner handed me a sheet of paper that had the words “Get on the Love Train.” It was her idea to place us behind the guest speakers. She was eager for the cameras to see my scarf.

D. Bruce Hanes (Register of Wills who bravely issued marriage licenses to LGBT couples), Sen. Daylin Leach, Rep. Steve McCarter and Commissioner Josh Shapiro spoke. I didn’t move because no one in front of the cameras moved either. At first I was afraid I’d have to hold a banner for a while. I stood at attention leaning on my cane for an hour. Most of the time I do not require a cane but I have issues with balance since scoliosis surgery in 2004. I use it when I am going to be in a crowded situation or walking for long periods. Later that night, I watched the rally on television and snapped a picture of myself on TV.

With the exception of “here, here,” I was giving my voice to the occasion without saying a word. Not out loud. It’s not unlike when I found my voice as a writer. The confidence blossomed inside which helped me find my voice and brought me in touch with the idea that when the two are combined they work together to make me a better writer. I look deep inside, find what matters most and write about it.

It wasn’t always this way. In the beginning of writing my memoir I had little in the way of confidence and still wrestle with that demon known as the inner critic. I have talks reminding myself my voice is strong, I have something to say; and standing up for something I believe in, even in silence, is expressing my voice. All this makes writing my memoir more bold and succinct; more to the point and deeply charged.

The working title of my memoir is Residual Quest. It is about my relationships as an LGBT female struggling with my own identity and my marriage to a man after being with women for twenty years; then when the marriage ended, returning to the LGBT lifestyle. My battle with addiction is explored in my memoir.

The most important factor in my story is my mental health survival as a young woman, just 17, when I was diagnosed with what was then called manic depression, now bipolar disorder. Subsequent hospitalizations (at least 25) spanned four decades. I am now 57 years old and it wasn’t until  five years ago that the proper medications were prescribed. Till then, I was extremely challenged mentally. My partner of fifteen years saw me through the worst of it all.

Whether she and I decide to marry remains to be seen. That doesn’t matter. What matters is that loving couples throughout Pennsylvania and across the nation have the option to marry. When Sen. Leach spoke, he said he looked at his wife and saw what he has as a husband and family man and became angry that the LGBT community isn’t yet able to rejoice in the commitment that married couples enjoy. I believed him when he said he was there to fight for LGBT rights. On that April day I was rejuvenated, alive and felt I was standing on the right side of history.

Jan L. Backes spent her childhood in the maze of post WWII streets known as Levittown, Pennsylvania. Currently residing in Plymouth Meeting, Pennsylvania with her partner, Flo, of 15 years, Jan’s hobbies include photography and an avid interest in covered bridges. Three things she cannot live without are God, sobriety and a peaceful home life. Her short story "Heavenly Baseball Diamond" about a young woman's struggles with addiction appears in the Women's Writing Circle anthology, Slants of Light. Says Jan, “I’m not afraid to share my darkest moments. I know my words will be met with open arms.”
Posted by Susan G. Weidener at 7:50 AM