It Takes a Village to Write a Book - Rae Theodore 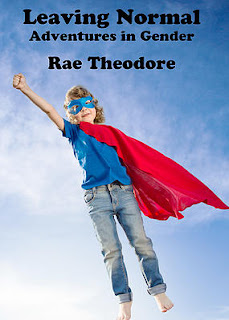 If you ever doubted the importance of a writing group or writing workshop to move a manuscript toward completion, this guest post by Rae Theodore should put those doubts to rest.

I had the pleasure of meeting Rae through our Women's Writing Circle workshop on memoir and, more recently, our June read around. Please welcome Rae, whose memoir, Leaving Normal: Adventures in Gender, was just released this week. ~ Susan

"I always thought writing was a solitary pursuit until I started writing a book."

That's the first line of the Acknowledgements to my memoir, Leaving Normal: Adventures in Gender.

Before I started putting my story down on paper, I had this image of what a "real" writer looked like. Real writers hid away in small offices and hunched over computer keyboards, clicking and clacking into the wee hours of the night.

I was already a writer -- a business writer.  That's how I paid the bills. However, I had put my dream of becoming a creative writer on hold. After I finished work for the day, I rarely found time for other writing, fun writing.  I had started a few short stories in notebooks but never finished them.

A few years ago, I started seeing a therapist, who gave me a homework assignment.

"Find a group or activity just for you," she said.

I considered signing up for an art class but missed the registration deadline.

My therapy sessions were on Fridays. I only had a few days to sign up for something. I recalled seeing an ad for a writers' group that met on Tuesday mornings at a nearby bookstore. I planned to attend one group meeting, report back to my therapist and get a passing grade in therapy.

I was nervous that first day. About five or six of us sat around a folding table in the back of the store.  We introduced ourselves.

"My name is Rae. I'm a business writer. After I'm finished work, I never seem to find time for creative writing.  I've always wanted to write a book.  I'm here to find some type of writing project to work on."

That became my mantra.

We worked on writing prompts, which was new to me. On that first day, I surprised myself by sharing in a shaky voice something that I wrote.  There was something magical about the writing space.

I showed up most Tuesdays, even though I sometimes wanted to stay home in my pajamas and watch Dr. Phil and reruns of Sex in the City.

I wrote about wanting to stay home in my pajamas and watch Dr. Phil and Sex in the City.

In responding to the prompts, I noticed that I mostly wrote about myself, my family and my life. It was my default. I started thinking about penning a memoir.

Our writers' group started a monthly critique panel. I submitted my first memoir chapter. I had written about a humiliating incident that I had never shared with anyone else.

I am climbing the back stairwell of my friends' off-campus apartment for a party.  I am  20 years old and a junior in college. Three students, two girls and one guy, pass me on their way down the stairs.

"What was that?" one of them asks.
Each new peal of laughter echoes and rings out like a shot in the enclosed space.
With one three-word utterance, they have stripped me of my humanness.  I feel raw and   exposed.

For a brief moment, I think that this must be what Eve felt like in those first few seconds after the fall -- red faced and uncomfortable in her own body for the very first time.

While I was waiting for feedback on my piece, I spent a lot of time in bed in my pajamas watching Dr. Phil and Sex in the City (when I wasn't hiding under the covers and praying for the world to end).

I fell into a routine of attending my writers' group every week, writing one chapter at a time and submitting it for critique.

I attended a memoir workshop run by Susan in which I laid down the bones for the book's title chapter. In the workshop, I learned about weaving light elements of a story with dark ones, and I played with that technique throughout my writing process. 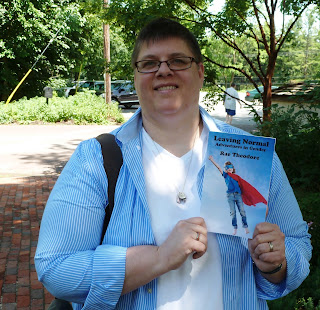 Each time I submitted a chapter for critique, I held my breath and waited for: This is weird.  You are weird. No one will want to read this.  You call yourself a writer?
In time, I realized the comments were my own.  Decades of self-doubt played on a loop inside my head.  Writing quieted the voices.

It took me about two years to write the book. I traveled back in time and landed in each chapter, trying to remember every detail -- the sights, a song playing on the radio, the smell of Gee, Your Hair Smells Terrific Shampoo, the way Pop Rocks feel as they melt strawberry sweet on my tongue.

I hope the book gets people talking about the red-hot topic of gender.  I hope it opens people's minds and hearts to what it's like to be different, a nonconformist, a gender rebel.

I thought the book would be a gift to others who saw themselves reflected in its pages. Turns out, it was a gift to me as it provided an opportunity for self-reflection, inspection and growth.

****
How about you? Can you share an experience - good, bad, or indifferent - with a writing group? Your comments are most welcomed.

RAE THEODORE lives in Royersford, Pa. with her wife, children and, in stereotypical fashion, her cats. By day, she works as a staff writer for one of the world's largest communications firms. By night, she writes about living in that middle place where boy and girl collide. Her favorite day of the week is Tuesday because that's when her writers' group meets. You can read about her adventures in gender nonconformity on the Flannel Files at middleagebutch.wordpress.com. She has been recognized by the blogging site for a story she wrote about a soggy fish sandwich and another about a mystical message from a plumber. Leaving Normal: Adventures in Gender, is her first book.