The Art of Memoir By Mary Karr―A Review 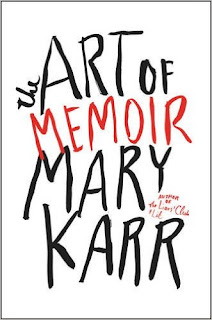 It’s been 20 years since Mary Karr’s memoir The Liars’ Club debuted, landing on the New York Times bestseller list for over a year. In her new book, The Art of Memoir, which comes out this month, Karr recalls her excruciating journey to mastering the genre.

“In some ways, writing a memoir is knocking yourself out with your own fist, if it’s done right,” she writes.

The Art of Memoir serves as cautionary tale, as well as clarion call to anyone who, as Karr admits, has the chutzpah (she uses a more colloquial term) to write a deeply emotional and personal story. It’s no easy task and is as much about risking the ire of family, as willingness to plunge into the depths of your own emotional quirks and peccadilloes, and “disrobing” (self-discovery). But its value lies in how it can “change us one by one.”

Karr first wrote a version of The Liars’ Club as fiction. The decision to write a memoir, instead, was eased by her mother’s absolution, although Karr admits she was “rattled” to the core when her mother read the book, cried, and said, “I didn't know you felt this way.”

It is this vulnerability―as well as honesty―that makes The Art of Memoir a primer for women contemplating writing their own life story. Karr emphasizes the incalculable importance of voice and truth, which, for many women, is the whole ball of wax. If we can accomplish that, we’re on our way to writing a story that not only changes us, but possibly our readers.

Karr’s abhorrence for “inventing stuff” (“it breaks the contract with the reader”) is something in which I am in total agreement. Writes Karr: “We can accept anything from a memoirist but deceit, which is―almost always―a shallow person’s lack of self-awareness.”

A professor of Literature at Syracuse University, Karr also goes hard on memoir writers who bring their own angst and lack of introspection (especially emotional) to the written page, thereby shortchanging the reader.

But it isn’t until Chapter 18 entitled Truth Hunger: The Public and Private Burning of Kathryn Harrison that Karr attempts to tackle head-on the discrimination women have faced in writing what male memoirists have always enjoyed―honest, in-the-trenches stories about sex, mothers, and the role gender plays in creating a meaningful life . . . without caring what others think.

Karr’s example of women’s “bravery” is Harrison’s memoir, The Kiss, in which Harrison “breaks a universal cultural taboo” and writes about sex and “being seduced at the age of twenty by her preacher father entering into what she calls an affair with him.”

At first, just as Karr had done, Harrison wrote her story as fiction. “I’d obeyed the cultural silence to keep quiet about incest,” Harrison says. When she did publish the real story as memoir, Harrison was roundly “blistered” by the press and male reviewers, who called the book “slimy” and “repellent,” accusing the author of “fabrication” and enjoying the “rapt attention of the gods of publicity.” One called her “a tease” for “not making herself smutty enough.”

“Harrison is a study in the courage a book can demand from its scribbler,” Karr writes.

It is here that the perfect segueway presented itself for Karr to open up about the current explosive trend of women finding their voice through memoir. Although with nods to Cheryl Strayed, Maya Angelou, and Elizabeth Gilbert, she doesn’t. Karr is soon back to exploring what makes for great memoir, devoting an entire chapter to Michael Herr’s Dispatches on which the movie Apocalypse Now was based. Karr also gives lavish praise to Vladimir Nabokov, Frank Conroy and other men who wrote memoirs, making the book gender neutral for graduate and undergraduate programs.

Karr admits to first writing about her troubled childhood and alcoholic mother as a fictionalized account because fiction "was what women aspired to". The unwritten credo that women keep silent about family secrets seems missing from her personal account of her memoir journey, although she does devote pages talking about how she eventually found her own distinct "voice."

I wanted so much for her to emphasize that memoir is the perfect literary vehicle to showcase women’s changing lives and tell their stories; or,at least, give a gracious nod to the popularity of independent publishing where women’s memoirs are stoking dynamic conversations and reflections on social media, blogs and writing conferences across the country. It didn't happen.

That said, in The Art of Memoir, Karr explores the right questions and, in my opinion, makes the correct conclusions about memoir. She offers wonderfully honest and educated insight into what makes memoir an art form.

Some of my favorite quotes from the book:

When writing about others: “be generous and fair when you can; when you can’t admit your disaffinity. My general idea is to keep the focus on myself and my own struggles, not speculate on other peoples’ motives, and not concoct events and characters out of whole cloth.”

Or this: “A memoirist forging false tales to support his more comfortable notions―or to pump himself up for the audience―never learns who he is. He’s missing the personal liberation that comes from the examined life.”

“To tap into your deepest talent, you need to seek out a calm, restful state of mind where your head isn’t defending your delicate ego and your heart can bloom open a little.”

“Great memoirs sound like a distinct person and also cover a broad range of feelings. The glib jokester becomes as tedious and unbelievable as the whiner.”

Susan G. Weidener is the author of two memoirs, Again in a Heartbeat, a memoir of love, loss and dating again and its sequel Morning at Wellington Square. A former reporter with The Philadelphia Inquirer, she started the Women's Writing Circle in suburban Philadelphia in 2009. She teaches writing workshops and offers talks on memoir. Her website is: www.susanweidener.com

Email ThisBlogThis!Share to TwitterShare to FacebookShare to Pinterest
Labels: Again in a Heartbeat, finding the truth in memoir, Mary Karr, Susan G. Weidener, The Art of Memoir, The Liars' Club