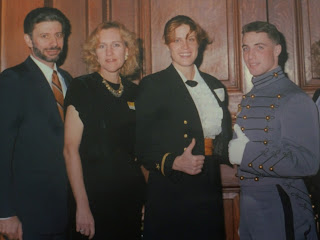 John’s class―the Class of ’71―meets this coming weekend for its 45th reunion at West Point.

Over the past several months I had received all the emails accorded the widows of the class; the invitations to the river cruise on the Hudson; the bus trip into NYC for shopping and sightseeing; the Friday night dinner; the tailgating party before the Army football game. I had seriously considered going. Then I asked myself, do I want to spend time with these people or do I want to sell books?

West Point brings back vivid memories of fall weekends when John and I traveled there as a young married couple. The possibilities then felt endless. Going there now to hawk a book based on his experiences at the academy during Vietnam felt wrong, especially considering the nature of the book.

A friend who read A Portrait of Love and Honor told me that my late husband John M. Cavalieri had a “complex connection” with West Point. Anyone who has read the book (a novel based on a true story) knows this is true. A soldier questions the military and comes to terms with a system―to quote a popular phrase―“rigged” against those who do not "fit in." He ultimately pays the highest price.

This story is complex, elegiac and not suited to "mainstream marketing," my older son, Alex, observed of his father's memoir which is the centerpiece to A Portrait of Love and Honor. How lucky I am to have a son who offers this insight and advice!

Just yesterday a reader said this to me about A Portrait of Love and Honor, "The story is highly personal . . ."

How do you―or do you―market the 'highly personal' memoir? This is a question each author must answer for herself. While some might argue that all memoir is highly personal, questioning "sacred cows" is not popular, although certain publishing companies will fail to educate the author in this for obvious reasons. (Trending topics form another category, in my opinion.) In embracing controversy, we raise eyebrows, which is a writer's duty.

The reunion also coincides with what would have been John’s 69th birthday, Sept. 11, 1947. John’s life was cut short due to what the Veterans Administration deemed a "service-related" illness. John died at the age of 47, a “casualty of war,” surely as if he had died in the jungles of Vietnam.

Before he died, John told me he had made peace with himself and with the system. In writing his story he asked the right questions, found the answers―and the forgiveness―he sought. What mattered most to him were his sons and his wife.

While no systems, no establishments are ever perfect, they do owe those who vow allegiance a willingness to be held accountable for their failures. It’s obvious to those who read A Portrait of Love and Honor that our military veterans are often discriminated against, not only in the military, but in the workplace.

At John's funeral 22 years ago under flawlessly beautiful October skies at West Point, two white-gloved Army officers handed me a folded American flag. That flag remains folded and stored in a closet in my basement. It’s not that I don’t value or appreciate it, rather I wish I could have held John all these years, not a flag.

(The photo pictured above was taken with two cadets at the West Point Founders Day Gala less than a year before John died in 1994.)

How about you? Have you written a highly personal story? How do you feel about marketing it?
Posted by Susan G. Weidener at 8:48 AM

Email ThisBlogThis!Share to TwitterShare to FacebookShare to Pinterest
Labels: a novel based on a true story, A Portrait of Love, John M. Cavalieri, memoir, USMA at West Point, veterans, Vietnam