Dog Days of Summer and the Writing Life 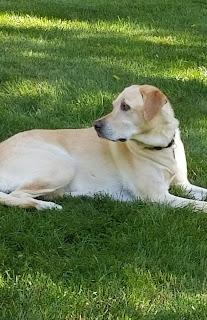 It’s been hot here—a scorcher. The dog days of summer—literally, and figuratively. Just Lily and me, limiting our walks to shade behind the house.

I head to the pool ... turquoise-cool waters shimmer and beckon—and then—enter the pool Nazi! (Remember the Seinfeld 'soup Nazi' episode?)

You know who I mean. The one screaming strict regimentation. You’re in the laps lane and she is moving like a torpedo, plastic yellow flippers flailing, sinewy arms slicing the water, goggled eyes deep underwater, and then she hits you with said flippers and splashing arms. You ask if she might remove the flippers. Instead, she tells you that you violated pool etiquette, pool rules, because you didn’t make known to her you were about to have the temerity to enter the pool and begin your own laps.

“You’re supposed to wait. I didn’t even see you,” she spits out. “But I can’t move as fast as you. It wouldn’t matter,” I protest. At which point she repeats pool etiquette, as if I embody her recipe for rudeness.

I could dismiss her as some frustrated mom/overworked career woman taking out her angst in a public pool, but, instead of telling her to sod off—as the British would say—I don’t want a scene at the place where I spend four days a week exercising. I’m going to let it go. Besides, it’s too hot; not worth the energy.
“Do you want to move into this lane?” a woman in her forties, wearing a broad-brimmed pink straw hat asks. She appears to be wading, not swimming. Thank you, I say. The pool Nazi ignores us and goes back to her furious laps.

I admit I’ve been feeling a bit stumped of late as to how to deal with the outrageousness and incivility going on out there. It makes me want to curl up with a good book with the rotating fan swaying in the living room, Lily sleeping at my feet. When people push you aside, tell you to move over, or ignore you because you fail “pool etiquette,” it marginalizes any hope of a human connection, let alone a civil conversation.

Later that afternoon, I go outside, still in my bathing suit, spray Lily with the garden hose, rub a dollop or two of Pert shampoo into her tawny-colored coat. I hold the hose away from her face, but close enough to splash cold water on her head. She closes her eyes in obedience and generosity of goodwill toward me, her human, for this indignity. I take a towel and gently wipe the inside of her ears. A dog is so simple.


Last year I taught a writing workshop on the art of the personal essay. Maybe it’s time I started writing those essays; seeing if I can get them published in the newspaper; or writing politically-charged missives on this blog? Writing my angst, my disgust, my disapproval of people and their atrocious behavior. No. This takes more effort than I can muster. Instead, I’ll keep working on my novel, crafting a scene, working the characters, like a potter at her wheel, a Labrador Retriever at her feet. 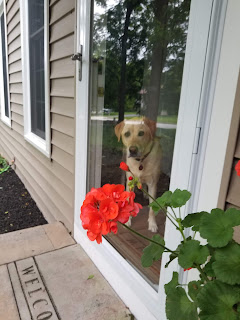 I can imagine a new story, a way to play with words, construct sentences. An email from a writer in the Women’s Writing Circle lands in my mailbox. She shares a story she wrote the night before when she couldn’t sleep. It’s amusing, imaginative, it inspires me to write.

I call Lily. We step out onto the deck. I feel the sun on my face. It’s still scorching out. Like my father used to say, this too shall pass … and summer’s dog days will be replaced soon enough with the cool breezes of autumn. But, for now, the heat is on. “C’mon girl, let’s go in,” I say to Lily, where the fan beckons. Best to keep cool.