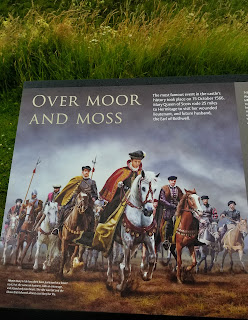 As I wrote last week, the wind whispers, the lakes ripple and history and the past collide to color moor, mist and moss in the English Lake District. Comfort and wellness for the poets and writers of the 18th and 19th centuries resided in solitude and nature's impassive silence and moment of being.

It bears little resemblance to today's "wellness" industries with their magical thinking, mugwort steam, crystals and rose quartz. History teaches that life and death played out on a dramatic and often short-lived stage, minus endless questions centered around Why am I so unhappy?

Sipping coffee on the front porch in the early morning air, I watch the first pink and orange streaks of light rise over the horizon. I feel lucky to be born now, in this time and place. Writers have always echoed and honored refrains of the past—not tearing everything down and starting from scratch, as happening now in our country. Wellness can be found in that sunrise, that writing class, accepting that much of what is to come remains out of our control. It is not easy. It never has been for us women.

I went to Scotland and got somewhat re-acquainted with the story of Mary, Queen of Scots. Imprisoned the last eighteen years of her life by her more powerful cousin and rival, Elizabeth I, Mary’s life was tragic and violent. Even her son, the future King of England (or the barrels of wine she consumed and bathed in), couldn't save the six-foot-tall beauty with the porcelain complexion from her eventual fate. I empathize with Elizabeth who saw Mary—for good reason—as a traitor and threat to her throne and legitimacy. Elizabeth, after all, had her own demons and destiny.

Poor Mary. She rode over bleak moors to rescue the wounded Earl of Bothwell—her third and final husband— in her quest to find a true and lasting relationship. But while she was pursuing this ill-fated venture, risking health and almost dying by the time she reached Hermitage Castle, she must have sensed the existential reality—not even a queen could outsmart life's twists and turns.


In Britain, we find these dramatic stories of women born into power through inheritance. In America, the self-made woman struggles to grab her piece of power, seeks autonomy from male-dominated professions and men who can make or break her career...she attempts victory over a political system riddled with misogyny. We pay big bucks to self-help gurus to help us right our thyroids, improve our sex lives, find instant remedies at the touch of a texted bar code, a podcast.

***
After I left the desolate ruins of Hermitage Castle, I traveled to Jedburgh and the house where Mary lived—albeit she remained only a month. I thought of her praying for salvation that would never arrive. How would it end for her? I read her final letter, preserved in a glass case. She expressed victimization and being misunderstood. But accept her fate she did.

I walked a steep hill to the jail overlooking the Scottish countryside. A display featured an impoverished woman incarcerated in solitary confinement for a month for stealing a potato, slowly going mad in her isolation. There was no wrangling out of the sentence, no jury of her peers, no "wait, you don't understand, give me a second chance." The anonymous faces of the dead haunt the Anglo-Scottish border.

After I left Jedburgh, I returned to the hotel—a castle in Otterburn, Northumberland, run by a sweet family— pulled out my notebook and made a list of aspirations. I have already outlived Mary, Queen of Scots by more than twenty years…not to mention that poor woman jailed for stealing potatoes who probably met her demise in her twenties.

How about you? Have you made a list of hopes and aspirations? Where does wellness lead for you?