"The Crown" and Shedding Tears for A Woman Alone 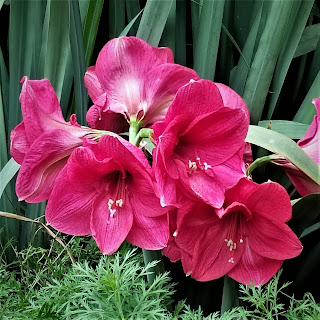 There’s a fascinating scene at the conclusion of the third episode of "The Crown", Netflix’s series now in its third season about Queen Elizabeth II.

Elizabeth has just confided to her prime minister, Harold Wilson, that she has “a deficiency”. That deficiency is the inability to cry. The revelation comes after Elizabeth berates herself for her lack of tears or empathy following the mining landslide in Aberfan, South Wales, which has killed hundreds, including 114 schoolchildren. She was unable to cry when her beloved grandmother Mary died, or shed tears of joy at the birth of her first child, she tells Wilson.

Wilson consoles her by saying that not all of us are cut out of the same cloth. We come from various backgrounds that influence our lives, beginning in childhood. Nor can we change who we are, he contends. But, as leaders, they must play the game, pretend they are something they are not, appeal to those who look up to them. Which is what happens when Elizabeth unwittingly “dabs a dry eye” with a tissue after visiting mourners in Aberfan when she finally agrees to go. The action is gratefully interpreted by the villagers as tears for their tragedy.

Here’s a woman who cannot cry, a woman who finds any display of emotion repugnant, yet must put on a show, so to speak, that goes against her very nature. As the episode concludes, Elizabeth, sitting alone in the palace, listens to the music played at the funeral for the victims. As the camera pans in on her, it is masterful acting by Olivia Colman who plays Elizabeth. One teardrop slowly wells up in her eye and rolls down her cheek. We learn in a postscript that waiting so long to visit Aberfan is Elizabeth's greatest regret as sovereign.

It’s hard not to empathize with Elizabeth and her plight, thrust into a role she neither sought nor wanted, but one demanded by destiny. The old ways are going by the boards and the times are changing with showmanship demanded. Like many women with only herself to turn to for inward strength, she shows us the agony and the loneliness that comes with being a woman alone, analyzing herself, second-guessing herself in a room filled with haunting music. 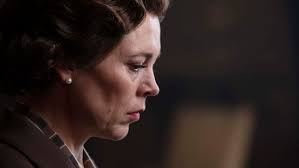 It strikes me that women who cry in public are subjected to a double-edged sword. If they cry, they are hysterical or weak. If they don’t cry, they are "deficient", lacking in empathy.

Elizabeth came from a long lineage of the British “stiff upper lip” mantra.  I was familiar with this in my own home. My father, whose mother was from Manchester, England, was very “British”, rarely, if ever, revealing his emotions. The privacy and lack of inner scrutiny demanded in my home made revealing my emotions, whether in public or private, often feel very dangerous. What would people think? Was I weak? Was I too female? Or, worse, was I too cold? Too callous? 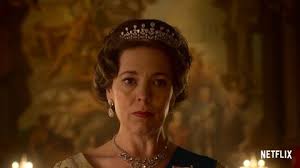 We can’t help but admire Elizabeth as she goes about her business in this third season of  "The Crown." The weight of her situation requires not just decorum but a lack of impulsivity, unlike her younger sister Margaret, who charms LBJ at the White House with her bawdy jokes, her lack of reverence, not only for the Kennedys but her own sister to whom she bitterly announces she plays second fiddle, not because she is less talented or intelligent but solely due to birth order.

Instead, we have Elizabeth, the plodding one, the “boring one” as her own husband Philip describes her, but the one upon whom the weight of the Crown rests. She deliberates each decision, is a model of reason and logic. It's hard to shed tears for this numb and heartless queen, whose mask is rarely removed. Or maybe not. Maybe her willingness for self-reflection in the face of tragedy has changed her and, in this, we all identify and empathize.

Susan, This is an insightful look into the character of Elizabeth. Even though she is married, and surrounded by staff, advisors and many others, she is truly a woman alone. She can rely only on herself to carry the weight thrust upon her by destiny.

Thank you, Marilyn. In the face of weighty responsibility, her self-sufficiency, and ultimately how lonely that can be, is interesting to view in this series. Sorting through emotions and being self-reflective is never easy, not just for a queen, but for the woman alone.

Thanks to this post, I have taken up again with the highly addictive third season of The Crown. Your comments about Elizabeth and Margaret Rose resonate with me. But now that I've viewed another episode focusing chiefly on Prince Philip and his spiritual crisis, I have renewed appreciation for his singular struggles in the family.

I don't fancy ever wearing a crown, Susan!

Marian, I loved that episode where Philip comes to his faith. So many great episodes, I watched over several nights, parsing them out to fully appreciate,