It's a Dog's Life—A Pandemic Journal 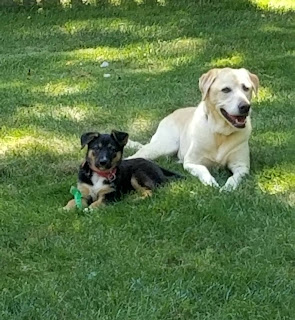 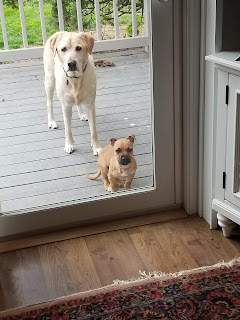 The old adage, it’s a dog’s life applies. Or, in my case, it’s a puppy’s life. I post pictures on Facebook ... puppies taking naps, puppies playing with squeaker toys, puppies begging to come in the house. Everybody loves puppies. My son got a dachshund/beagle puppy in March. Although her name is Goose, we call her the 'diva' because she is fearless and loves showing off. She’ll make one flying leap off my deck, airborne for a brief, sweet moment, before landing on the lawn and racing after Lily, my yellow Lab. I spent July 4th weekend entertained by the diva dive bombing off the deck.
My older son got a German Shepherd puppy on my birthday, July 11.We drove all the way out to Ohio to get Rin, which is short for Rin Tin Tin. 'Rin' means companion in Japanese, fitting since my son is a black belt in the Japanese martial art, aikido. This past Saturday, I spent the afternoon puppy-sitting Rin. All went well, puppy chomping on a chew toy and on Lily's ears until the neighbor started his lawnmower. It's crazy how fast a puppy can disappear. I raised two kids. How could I lose a puppy? I panicked until I realized she was under the deck. She remained terrorized under my deck for the next two hours. She’s a baby. Not quite nine weeks.
Both puppies nip at Lily’s ears. At seven years old, Lily wasn't prepared to be Mama to two upstarts, to herd them around the backyard, to have the upstarts hog the attention, to shamelessly prance off with her toys. That’s her lot lately, her life in pandemic world.
Then there's my lot in pandemic world. Like most writers, I vent. The blank page serves as a sounding board, an 'in-house' psychiatrist. It had been three weeks without a dishwasher. The machine wasn't due for another week so when the plumber called Friday morning and said he had it and could he come by to install, I jumped. Absolutely! Two hours later, a young guy arrives. I met him outside, wearing a mask, one of those blue things the dentist wears. He looked at me, “Oh yeah, I have a mask in my truck. I should get it.” I felt like saying, yeah, you should. I was so thrilled to have my new dishwasher installed, I felt like it was Christmas so I didn’t say anything, not when he lay on my kitchen floor, huffing and puffing to take the old dishwasher out and wasn’t wearing a mask. Not when his ‘backup’ appeared about an hour later, another guy in his mid-twenties, wearing a bandana that covered his mouth but not his nostrils. Not when he asked me to sign off on the work order, asked to borrow a pen, and wasn't wearing a mask.
After they left, I disinfected everything in my kitchen top to bottom. As I scrubbed away, I thought of Bukowski, who said, “If I bet on humanity, I’d never cash a ticket."

That's how I'm feeling lately. I’m not a person to police other peoples’ activities, or tell them what to do. I know the plot we’re all living. I get it. It's hard. But what's so hard about covering your face with a cloth?

If our warped, vapid president would wear a mask, others might too. If the deranged governor in Georgia would enforce a mask mandate, maybe we’d be where Thailand is with little or no spread or infection and I could travel again. Our country’s lack of leadership has turned us into pariahs in the EU because our infection rate is soaring. Even Canada and Mexico don’t want us.
I met two friends last week for a picnic lunch. Ninety percent of the conversation revolved around pandemic world. One friend had, not one, but three, appliances conk out since this madness began. Another is heading to New England for a vacation. We’ll be doing a lot of take-out and barbecuing, she said. Some vacation, I think. Half the fun of a vacation is dining out, lingering over cocktails in an air-conditioned bar, eating a leisurely meal and not cooking. I'm going nowhere this summer, so I talked about the puppies. What else? You should see the diva, I joke.  It's a dog's life here in pandemic world.

There’s an excessive heat warning today. No outdoor pools open. Just Lily and me. I’ll be writing, reading and doing what I usually do to keep my sanity ... appreciate that I’m still virus-free ... at least for now. And, playing with puppies sooner, rather than later, no doubt. Oh, and running my dishes through the dishwasher again. 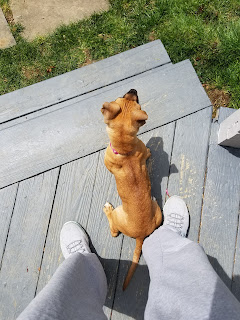 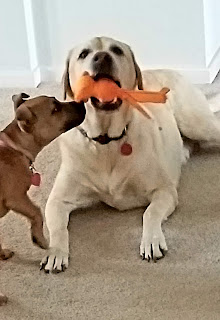 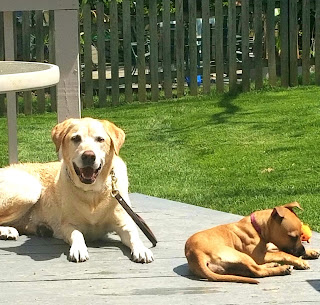 Oh, Susan, this is priceless and spot-on! We could all use a good dose of humor and sarcasm to get us through this quagmire of mixed emotions and chaos were currently enduring—especially since it didn’t have to turn out this way. The lack of leadership, lies and incompetence of our president are appalling. So I gaze at those puppy-Lily photos and hear about all those puppy-antics and it brings a smile to my face. And to top it off, you have a new dishwasher! Why, oh why, don’t people cover their faces?? Such a simple measure. It’s so frustrating to know that we have some degree of control, yet enough people who aren’t complying are tipping the balance in the wrong direction. Don’t get me started!

Kathy, Yes, why oh why? Again to quote Bukowski we're all "sifting through the madness." Why am I writing about the pandemic again, I ask myself? Because there is nothing else to write about! You are SO right, that it didn't have to be this way. At least, the puppies and Lily make for some good fun and joy. And, btw, speaking of joy, so does a 'silent' dishwasher. My old Amana sounded like an airplane turbo engine. Now I can actually sit in my family room and watch TV again while the dishwasher is running. Here's to the simple pleasures in life.

Hi Susan. Yes, dogs are a good thing to write about during the pandemic. They are not burdened by our disastrous leadership. If everyone wore a mask, this virus could be contained in a month. But I digress.
Dogs are a comfort and joy.

We almost lost our oldest dog, Cassie, this morning. She has a bit of dementia, and when she ran to retrieve a ball, she got confused and ran the other way, toward the busy road. We searched for half an hour before a neighbor found and rescued her. She is fine.

Puppies are good for the soul. So needed at this time. Enjoy yours and your sons’.

Hi Marilyn, Thank goodness Cassie is safe. That must have been harrowing. Dogs give us so much joy. The diva paid me a visit last night and her whole face lit up when she saw Lily and me. It's like she's saying, 'Party time!' which we all certainly could use. Keep safe and healthy.