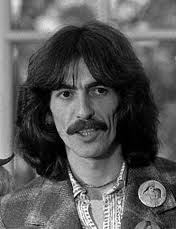 Last night I watched the HBO documentary on George Harrison, Living in the Material World.  I was struck by Harrison saying how even after writing song after song,  he still hoped to write what he considered a "good song."

That got me thinking about what Natalie Goldberg wrote in her classic book, Writing Down the Bones.  Goldberg said we have trouble "connecting with our own confident voice and even when we do connect with it, we have trouble claiming it."

The doubt that besets artists after people tell them they love their work is all too familiar.  They are amazed since they don't believe it themselves.

When people tell me they loved my memoir, I often think they say that just to be kind because I know I could have written a much better book.  When that happens, I want to stop writing. Then I go home and try to remind myself that confidence is necessary if I want to continue to write.  For the very act of writing is risking vulnerability.  It is opening yourself not only to the criticism of others, but to your own censorship and fear.

It comes down to trusting your voice and writing about it and then, as Goldberg says, "acknowledging it and standing behind it."

Luckily for us, Harrison's inability at times to claim his greatness was offset by a charming bravado that surely helped him become the writer he was.  For he said that if Lennon and McCartney could write songs, then "anyone could."  And with that he penned his first song, "Don't Bother Me."  Maybe it wasn't a great song, but look at what came after. We'll never know if he thought "While My Guitar Gently Weeps" was good enough.
Posted by Susan G. Weidener at 10:45 AM