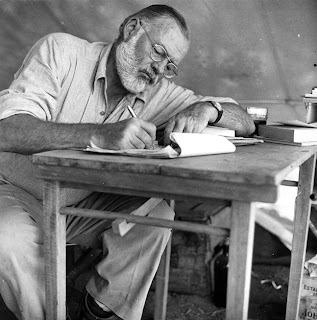 Memoir is often maligned as self-indulgent, unimaginative and inconsequential. Yet what writer has not written memoir, even if cloaked as fiction? It is what you do with the story, how you make it larger than your own experience, that determines its appeal. . . how you take the ordinary and turn it into the extraordinary.

Does writing memoir make one less an artist than writing fiction because the writer can't be bothered to make things up?  What blurring exists between fiction and non-fiction?  And is it important as long as the story is true?

A recent New York Times book review discussed the impact of releasing Ernest Hemingway's letters and photographs.  One photograph of Hemingway drinking with friends at a table in Pamplona includes a caption that states that everyone in the picture was a character in The Sun Also Rises, only given a pseudonym.

Laments the reviewer, Arthur Phillips: "Hemingway shaped real people and events into stories, but he also explicitly said stories and memories were different. The fiction was meant to serve a larger purpose. It seems the life project of some scholars (and now even his granddaughter) is to shout him down, to remind us only to read his great works small.

Phillips also writes that the fascination with Hemingway, the man, kills — or at least weakens — the power of his fiction, limits how we think of it. We start to read it small, view it as merely well-pruned memoir. It becomes an illustration of his life (“Oh, that character’s really his first wife”), when of course the best of his fiction is unique because it is not just one man’s story. It is great art because of its range of possible meanings and effects. His finest fiction is vast, universal, open to interpretation, changeable and debatable, intentionally opaque, impersonal. It is ours, not his."


A writing prompt for our Dec. 10 read-around.