Does True Love Only Come Once? 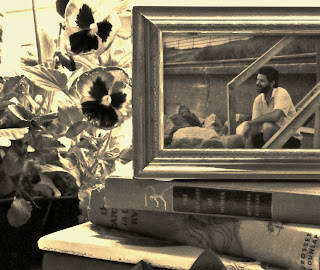 In her new memoir Susan G. Weidener writes the journey of a woman's life through love and loss with the unflinching eye of a romantic and a realist.  Does true love only come once, she asks as the memory of John lingers?  Her journey searching to find herself again has been compared to that of every woman.
What readers are saying  about Morning at Wellington Square:


"As life's losses mount, Susan takes an unflinchingly honest inventory of her experiences in this authentic and engaging memoir. Through her funny and poignant personal stories, her readers will recognize and relate to themes of love and loss, job changes, raising kids as a single mother, the quest to find love again and coming to terms with life - ultimately making meaning and finding her own strength in all of it. It's a quintessential woman's story of transforming life events into a life that is truly her own. And I love that even with all her crazy dating experiences she never quite gives up on the idea that she could find love again!"
"As you savor this book, you will feel as though you are having a private conversation with her . . . . you will learn as much about yourself as you do about her. For me, she put into words many of the feelings that I experienced as I searched for personal fulfillment after losing my career and my husband."
"Susan Weidener's newest offering is a welcome and satisfying follow-up to her earlier memoir AGAIN IN A HEARTBEAT. The honesty with which she deals with sometimes difficult situations, like online dating and taking chances in new locations with total strangers, is refreshing. I'm sure many women (and men as well) will also find it very helpful as they deal with getting on with life after loss. Though written as a sequel, the book definitely stands on its own as a good read."
To order Morning at Wellington Square:  Contact Susan G. Weidener at sgweidener@comcast.net or visit her Author Page at:
http://www.amazon.com/-/e/B004G7AXQY

What lives in my mind now is that moment in 1977 when I first met John under white dogwood trees above the parade field at Valley Forge Military Academy.   It was the beginning of happiness . . . and all that has come since.
The night I fell in love with him we were sitting on the sofa in my one-bedroom apartment.  The floor was strewn with copies of the weekly newspaper where I worked as a reporter.  John asked if I wanted to go to West Point for a football game. He would take me to Flirtation Walk which ran along the Hudson River.  This was where cadets made out – and more – with their dates, he grinned. His long dark eyelashes, the dark hair on his wrists made me want to touch him, feel his lips on mine. His deep set brown eyes locked onto mine as if he had read my thoughts.
He told me he fell in love the moment he saw me that day at Valley Forge.  For the first time in my life, I felt what it was like to be adored for who Susan was, not who Susan pretended to be.  I could say anything I wanted and he thought it was fine, interesting, amusing.
On our first Valentine’s Day his beautiful flowing script adorned a huge pink and red card with hearts and doves.  A lovesick lion gazed out from behind the bars of his cage. “To my favorite reporter.  To put it mildly, I love you wildly,” John wrote.
John wore his heart on his sleeve.  For that alone I loved him passionately.
Two children and sixteen years of marriage later, death stole our dream of growing old together. As English writer Julian Barnes said, “For sorrow there is no remedy.”
For the dead do not return, they only haunt our memories.
We buried John with full military honors in the Catholic cemetery at West Point, high above the Hudson River where years before he and I had held hands along Flirtation Walk.  It was a brilliant Indian summer day in October.  I remember being handed the American flag.  I remember my grief-stricken parents as my husband’s coffin was lowered into the ground.   I remember Alex and Daniel running up and down the lobby of the Thayer Hotel where we were staying.  The boys seemed oblivious to the magnitude of the event.   I was too numb to accept it.
Posted by Susan G. Weidener at 8:54 AM

Great post, Susan. Thank you for sharing. I am one of those who definitely believes true love only comes once in a lifetime. There may be many loves but only one TRUE love.

Thanks, Sharla. I think one of the main reasons I wrote my memoirs is to come to terms with that ... true love only comes once. Although my time with John was a short 17 years, I am probably luckier than most in that at least I had true love once. And in that realization comes much healing. Now my journey has led to another "love," which is in writing and coaching other women to write their stories.