Men In The Women's Circle 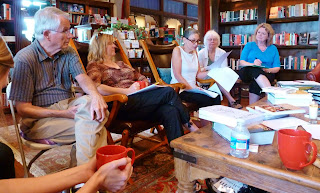 I admit I am perplexed, although not surprised by the claim that women’s writing groups exclude and perpetrate barriers.
Anyone who attends a women's writing group feels the magic, the alchemy.  In fact, women have always gravitated toward other women, whether it was a sewing circle in the 1800's or a book club today.  The safety, the security . . . the implicit understanding that we, as women, travel a common journey forms a bond beyond words.

Women only groups have great value as a place to share, empathize and validate as I learned firsthand by attending a woman's writing retreat which was the catalyst to my memoir journey for Again in a Heartbeat five years ago.

I can only imagine how different my life would have been if I had not been there.

Our June meeting was the first time a man had attended a read-around of the Women’s Writing Circle. Boyd Lemon, the author of a memoir Digging Deep about the failure of his three marriages, was our visitor. Boyd offered the male perspective, as well as the vulnerability that comes with memoir writing.  By the end of writing his story, he confided,  he understood that the failure of his marriages was in large part due to the unconditional love and acceptance he found from his mother and his desire that his wives replicate that.


This candid admission gave powerful insight into the self-discovery of memoir and its healing journey that goes beyond gender issues and is the basis for the genre's growing popularity, not just among writers but readers.  This admission also led to a discussion about some men and their changing roles; their confusion, as Boyd put it, on how to “deal” with the feminist movement. 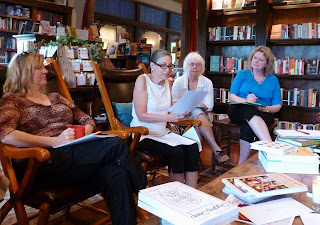 Boyd’s impending visit had triggered a conversation in the Circle last month when the women learned that a man would attend a read-around.  The fear, the questions, and the concern that something valuable and sacred would be lost by opening the read-around to men quickly surfaced and was openly and honestly expressed.
“I’ve been in writing groups before where men try to dominate,” one woman confessed.
Finally upon reflection that same day, all the women – totaling 14 – agreed to put their skepticism aside and be open to a man’s presence in the writing circle.  After Boyd’s visit this past weekend, the overwhelming consensus was that Boyd was a special man, an excellent writer and a valuable resource for writing techniques and honest truth-telling in memoir.  Still, the question persisted.  Would the writing circle be open to men in the future?
While our Women’s Writing Circle workshops have always been open to men, the read-around  . . . which is often a raw and intimate sharing of our emotional and psychic lives, has not.

The Women's Writing Circle . . . I view it as a communal, meditative and restorative place for women to write their stories.   It is also a fact that we (women) have been downtrodden as a sort of "minority" group for a long time.  We don't view our Women’s Writing Circle as discriminatory, rather it is a freeing atmosphere. 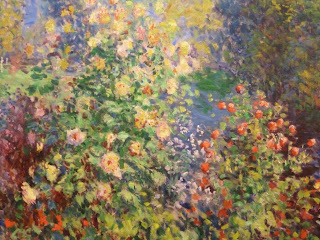 Many of our writers are beginning the journey of finding their voice through the written word.  This is worth more than gold.  It is a matter, not just of the heart, but the soul. Any sabotaging could cause irrevocable damage.

One of the reasons I suggest women in the Circle be careful who they show their work is due to the word “victim” that is sometimes applied to women who write the truth of their stories.  I believe it is the woman writer's worst fear - that the old patriarchal stereotype of women as "victim" and as "whiner" will be thrown at her when she writes the truth of her story. 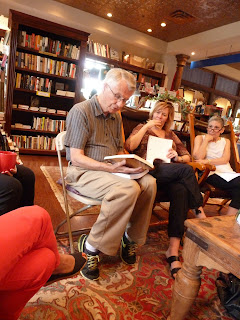 Mary Pierce Brosmer, founder of Women Writing For (a) Change, writes in her book of the same name about her group's read-arounds:

“WWfaC read-arounds are radical in that they are simply and persistently by, for and about women’s words.  Radical in that we are going to the imbalance in our culture, and on a small scale, attempting to heal the attention deficit women and girls have historically experienced by keeping our attention on women’s – and girls’ words.”
So for now, we shall continue valuing and loving one another in our journey of the feminine.  But, as always, time will tell and we shall see  . . .  where the path leads, keeping ourselves open and remaining hopeful that our words will bring all of us closer together. 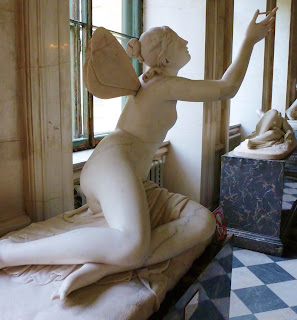