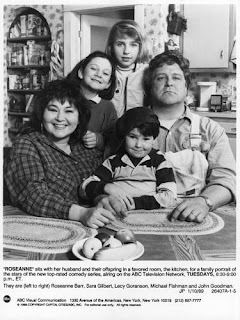 I've been watching the 25th anniversary celebration of "Roseanne" on cable television.  When the show debuted in 1988, I remember calling out to my husband.  “Come here!  You have to see this woman! You won’t believe her!”  Instead of  a sex goddess or a saccharine sweet-tempered mother, here was something brand new on television.  A strong, outspoken woman. "I don't know how to be weak," Roseanne confesses in one episode.  She took us into the trenches of day-to-day living.
Once a week, John and I settled in on the sofa and watched the newest episode of “Roseanne,” the jazzy, horn-blowing opening letting us know we were in for another gritty experience. Her stories were controversial, which made them interesting and entertaining.  Roseanne raised the bar for television sitcoms.   She was an innovator.

Watching the reruns of the show, I think they are as relevant now as two decades ago and offer lessons to writers.  She gave us unfiltered and complex views of being wife, mother, sister, daughter and friend. Meaningful portraits drove each new episode. Her rebellious older daughter Becky scorning her; Roseanne's exhaustion of being a waitress and working mother . . . husband, Dan, a man with a volatile temper and strong opinions who she unflinchingly stood up to.  Sometimes scared and overwhelmed, Roseanne showed us fear translated into caustic and irreverent wit not just toward others, but herself.  I felt, too, she was having a good time with her stories . . .  her ad lib laughter obvious in many scenes in the “Conners' kitchen” with Jackie, Dan or the kids.

Roseanne's last words on the show.... "I realized that my dreams of being a writer wouldn't just come true; I had to do the work. And as I wrote about my life, I relived it, and whatever I didn't like, I rearranged. I made a commitment to finish my story even if I had to write in the basement in the middle of the night while everyone else was asleep. But the more I wrote, the more I understood myself and why I had made the choices I made, and that was the real jackpot. I learned that dreams don't work without action; I learned that no one could stop me but me. I learned that love is stronger than hate. And most important, I learned that God does exist. He and/or She is right inside you, underneath the pain, the sorrow, and the shame. I think I'll be a lot better now that this book is done."
******
Looking back on writing my memoirs, I made a commitment to writing them to the end, wherever the road might lead. I couldn’t wait to get that first cup of coffee in the morning and head up to my study . . .  later, lingering over what I had written, taking a walk and reflecting, coming back to it the next day. I also learned that some days were better than others.  I realized that some days the words wouldn't come and it was fine to take a break and put down the pen.
In hindsight I appreciate the entertainment value of writing my life stories. I remember one scene I wrote in Again in a Heartbeat.  It was about when I first proposed marriage to John . . .  a stolen lunchtime proposal on his lunch break and mine, just after we had made love.  I could hardly believe my own audacity when I looked back on it! Proposing marriage.  Luckily, he came to the rescue and agreed and then proposed to me.  In Morning at Wellington Square, I recalled the joy of meeting the first women who came to the Women’s Writing Circle.  We were surrounded by books in a space that resembled a bookstore right out of Dickens’ London.  Had I really had the nerve to think I could organize a writing group on my own?

Among the many benefits and tasks of writing are:

As always, your thoughts and comments are welcome here in the Circle.