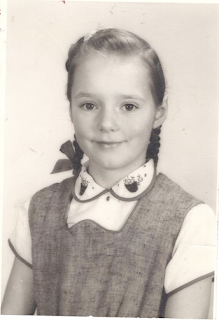 Shirley Showalter's memoir, Blush, is making its debut this month.  We met online through a writing group and I was fascinated to hear she had written about her life as a Mennonite. To write a memoir is hard enough, to write one as a woman raised in a Mennonite community seemed huge. I've always appreciated the beauty, serenity and charm of Lancaster County, where much of her story takes place. I grew up in the Philadelphia suburbs and every autumn when the farms and fields in Lancaster County turned a rich gold, I traveled there to enjoy this very special place where people have for centuries formed close bonds around church and community. Please welcome Shirley to the Circle.


I’ve lived the life of a pioneer. I was the firstborn in birth order, the first person in my family to go to college, and the first woman president of Goshen College. I’ve enjoyed the role of path breaker, but not without struggle.


You see, I’m a Mennonite, and Mennonites value humility above almost all other virtues. You won’t be surprised to learn that publishing and marketing books about one’s own life has a very short history among Mennonites. However, the outside world has begun to tell stories about our religious cousins, the Amish, and about us Mennonites. Sometimes the stories ring true. Sometimes they are laughable to anyone who has lived in an Amish or Mennonite community (which are often found side-by-side).

So telling an authentic story about Mennonite life appeals to me, and so does contemplation and community – connecting to self, others, and God. Writing has helped me find my voice at every stage of my life, which is one of the most important reasons I wanted to write a memoir: to go deeper into the process of self-discovery and connect to the same process in the lives of my readers.


This book trailer tells the story: http://youtu.be/I-Mxk3YzYrM
Above is the photograph of Kathy Wenger and me. This house belonged to members of my family for at least 80 years. Today it’s called Forgotten Seasons Bed and Breakfast. I love the fact that I can still sleep in the rooms of my childhood. And that the new owners are Mennonites who look and act much like the people I grew up with.


Lancaster County, Pennsylvania, attracts over eleven million tourists a year. They come looking for beautiful, manicured family farms, plainly-dressed people, and a sense of entering another world within a larger one. To me, growing up in the 1950’s and ‘60’s, this world was not unusual at all. It was, instead, the very center of my universe. My parents and nearly everyone I knew well was Mennonite. I would have to decide whether to become Mennonite too. Therein lies one of the biggest inner conflicts in the story.


Fifty years later, after a career as a professor, college president, and foundation executive, I began to reflect on my childhood in a new way. I wanted to test whether some of my stories would interest, inspire, and help others. First I had to become the historian and psychologist of my own life.


What could I learn from my experience of growing up “plain” (another word for Mennonite and Amish whose prayer coverings and modest dress define them)? A literary contest in the local newspaper gave me a place to try my hand. So, I took up my pen, went on retreat, and began to write. When my first memoir essay won first place in 2007, I took that encouragement as a sign to continue.


My opportunity to write a book-length memoir came in 2010 after I had moved to Harrisonburg, Virginia. I proposed a book about a “real-life Mennonite” experience, hoping that among the millions of people who travel to Lancaster County, watch Amish reality shows, and read Amish and Mennonite fiction there would be some readers with a real craving for authentic first-person stories. Herald Press, the publisher for the Mennonite Church, offered me a contract.


A book contract means deadlines, and it means learning how to move from the essay form to the book form. It means searching for larger themes. I found all of these tasks to be more challenging than I expected them to be based on the relative ease of writing the first essays.


Since the publisher needed a title a year before the book was finished, the task of locating a theme was accelerated by one of the most helpful tools ever – a deadline. The publisher and I moved from a working title of “Rosy Cheeks” (a high school nickname) to the more universal title of Blush: A Mennonite Girl Meets a GlitteringWorld.


This title named the primary tension between church and world in my inner life that I wanted to explore. I wrote a full draft, cognizant of the theme, but still not happy with the narrative arc. So I hired another editor to help me with developmental editing of the story. And I wrote an introduction that finally “clicked.” 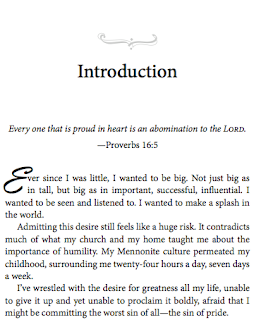 After I wrote those words, I was able to do two things: (1) edit with purpose, strengthening the theme, and (2) imagine how a reader might make use of my book in her or his own life. Thus, the phrase “embrace your blush” became part of the story I now have to tell about the book as its author. Finally, I had language to connect my life with any life.


I’ve learned so much already from my journey into my own past. Now I’m eager to engage with readers as the book enters the world and I tour the places that have formed me. The official book launch will take place September 19 at 7 p.m. at Lititz Mennonite Church in Lancaster County, Pennsylvania, and will include singing and story telling with Mennonites old and young, plain and fancy. Please join us if you’re in the area. It will be an inspiration and a party. Enjoy homemade cookies from the old family recipe in the book.


Here are a few lessons gleaned from my experience for other memoir writers:


·         Recognize the need for a narrative arc, or at least a thread of themes and subthemes, when you write a longer work. Look early and often for the answer to the question: “what is this book about?”


·         Build a community of people interested in your themes as well as in your life. This is necessary if you are to find an audience larger than friends and family.


·         Seek endorsements from folks who have audiences similar to the ones you want to reach.


·         Involve your own blog/FB page/newsletter following in key decisions and events. Show them how grateful you are for their interest and show them their influence in the final product.

Shirley Hershey Showalter began her career as a high school English teacher. After receiving a PhD in American Civilization from the University of Texas at Austin, she became professor of English at Goshen College in Indiana. She was named president of Goshen College in 1996 and served there until 2004. After six years as a foundation executive at the Fetzer Institute, she and her husband Stuart moved to Harrisonburg, Virginia, where she was able to devote herself to writing her memoir in 2011-2012.  Her website is: http://www.shirleyshowalter.com
Posted by Susan G. Weidener at 8:59 AM