A Writer's Task—Understanding Family of Origin 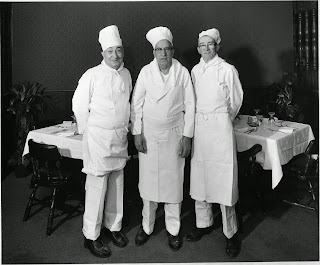 All family tapestries are rich and they're all varied. Sorting through the "chaos" of memories, the writer's understanding of family dynamics leads to awareness and meaning. It also offers hope and joy for the writer, and inspiration to the reader.

Look at the picture of the three chefs. The one on the right is my “Zio Mino,” Uncle Primo. (When my mother was a girl, she mispronounced his name, and it stuck.)


Those are three happy guys. They’re standing in Asti’s, the Italian Greenwich Village restaurant legendary for its singing waiters, many of whom were professional opera singers. They’d break into song for the guests. When the place closed its doors in 2000, after a seventy-five-year run, The New York Times wrote, “Say goodbye to pasta with Puccini.”


Zio Mino and his friends were chefs there for many years. I’m guessing this picture was taken in the fifties or sixties.


Among Italians and Italian Americans, there’s a phrase, un lavoro ben fatto, meaning “a job well done,” a practice passed down through my family in just about every aspect of life. Can’t you see it in this picture? Look at how bright their chef's whites are. Look at those toques, the sparkling banister on the upper right, and the carefully set tables. If you think the place looks good, you should have seen the dishes Zio Mino used to produce, even at home. They were works of art and you better believe they did not appear before you, even if you were a kindergartner, unless the colors, the balance, and the aromas were absolutely perfect.


I grew up in such environments everywhere I went. In the Blue Chapel in Union City, New Jersey, where my maternal grandparents lived, I’d go with my grandfather, Taddeo, into the cloistered convent and, in complete silence, watch from below as a picture, wrought in mosaic tiles, took form on the ceiling. My Nonno would go up the ladder, lie on his back, and place tiles, piece by painstaking piece, and then come back down to regard the view from below. Up and down he went, ever patient, ever fascinated.


In the same way, my maternal grandmother, who, as a young woman, worked as a presser in an embroidery factory, would devote as much time to ironing the pleats in the skirts of my Catholic school uniforms as, no doubt, somebody spends on Queen Elizabeth’s dresses today.


In the same way, my father would write his legal briefs, my mother would clean the house, and my aunt, the nurse, would take care of the sick—in body and spirit.


Truth to tell, I picked up the habit in my own work as a writer, an editor, and a publisher, and, frankly, as a home cook and in many other areas of life. It took me until recently, however, to understand the role of un lavoro ben fatto in my own psyche. For a time, I mistook it as the pursuit of excellence and, in a way, it is, though, it seems to me, the old Italian way is filled with joy while the pursuit of excellence, always endless, is fraught with tension and questions like, Am I good enough?


My Italian ancestors were a determined bunch, too. When I look at the picture of the three chefs, I remember that Zio Mino, when very young, was a stowaway on a ship that traveled from Italy to America. He was going to come here, and that was that. He was a man of high personal virtue, which came into play when Eddie, the only son he and Zia Esther had, died of pneumonia when he was a young father. Zia Esther, devoted to her son, almost lost her mind. I’d heard that over and over again, in the family, but I also witnessed Zio Mino’s devotion to her and his constancy and faith in simply carrying on. She followed him in that direction—forward.


Decades later, I, too, lost my only child and, somewhere in my psyche, accessed that story from long ago, complete with the determination, the elaborate nurturance, the insistence on living. It was such a large gift that it enveloped me. That’s why large gifts are so difficult to see or, sometimes, even bring to mind. We actually live in them.


What is the importance of understanding our family of origin? How did it influence your story or memoir? Your comments and thoughts most welcomed.

Lorraine Ash, MA, is a long-time New Jersey journalist and writing teacher whose passion for the art of a well-told story also has led her into the realms of memoir, plays, and essays. She is the author of two memoirs—Life Touches Life: A Mother’s Story of Stillbirth and Healing, which is about coming to terms with the stillbirth of her only child, Victoria Helen, and Self and Soul: On Creating a Meaningful Life, a woman’s midlife story about keeping faith in life as it is. Her work has appeared in a variety of anthologies and literary journals. Lorraine also adores editing memoirs and is editorial director of Cape House Books, a boutique collaborative publishing company. She lives with her husband, Bill, in Allendale, New Jersey. For more information, visit www.LorraineAsh.com