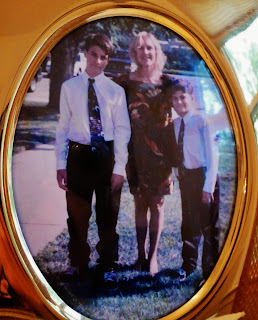 The thought that someday I might be a single mother would never have occurred to the little girl growing up in a two-parent household in the middle of bucolic suburbia. My “reality" . . . the lens through which I viewed the “normal, well-adjusted” life . . . a mom, a dad, a big brother and a blond cocker spaniel.

My parents would remain married for 55 years; my marriage ended after 17 years.

“I don’t know how you do it!” women remarked at soccer games when they heard I was raising eleven and seven year-old boys alone.

Trying not to let my hackles rise, I coolly answered, “You‘d be able to do it too, if you had to."

I don't know if their comments were well-meaning as much as you might exclaim over a strange specimen in a museum; looking at it from different angles, trying to determine its manner of oddity.

What I do know is that more than anything, I didn’t want their pity. I remained determined to appear strong - especially to my sons who no longer had a father – that precious influence, mentor and guide that only a father can be to his son. We had to get beyond that – I had to get beyond that. “Your father didn’t want to leave us," I told the boys over and over . . .

In recent Pew Research Polls, respondents were asked to rank a list of seven trends, such as interracial marriage and gay couples raising children, as being good, bad, or of no consequence to society. More respondents—nearly seven out of ten—ranked “single mothers” as being bad for society—more than any of the other choices.


The stigma of the single mother resides in the notion that we handicap our child’s growth and well-being simply because we are women who cannot cope without a husband. I feel it is a way for some to promote the virtues of marriage at the expense of the single mother, who whether by accident or design is lumped into one stereotypical group.

The most recent example of the "stigma" – a single mother in Baltimore is viewed on national television slapping and berating her 16-year-old son following riots protesting police brutality. If a dad had been seen doing this, it wouldn’t have caused a ripple, let alone gone viral or incited yet another national debate about the perils of single mothering  - stigmatizing and blaming us for everything from lack of education, inability to find work, "loose" ways with men, irresponsibility in not providing our children with a father.

The journey of the single mother - its perils and its joys - is a microcosm of life itself.

The boys at the arcade in Long Beach Island, NJ, winning, not one, but eight brightly colored stuffed animals.

Starting our own traditions: celebrating Christmas Eve day by taking in the new Lord of the Rings or Harry Potter movie; boiled lobster with sides of spinach, rice, and drawn butter on New Year’s Eve.

Watching my sons master the art of cooking and whip up sophisticated dishes I had only read about in magazines.

Seeing them become black belts in the art of aikido.

Swimming together in a lake where my younger son’s eyes popped out as my girlfriend stepped out of the water with the bottom half of her bathing suit askew . .

Getting a call from the police. 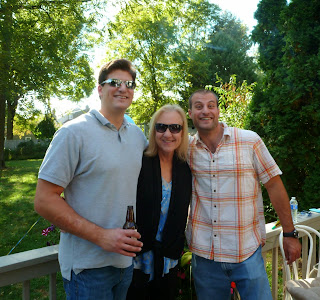 Watching both of my sons walk away from the podium with a college degree in hand  . . . and doing it in four years.

I can never speak for Alex and Daniel as to what they went through without a dad. As a writer who has penned two memoirs, it's my belief that when it comes to memoir we can't get into another person's head.  What we can do is observe and offer the "truth" as we see it, know it, have lived it and how that truth reflects back on us.

Looking back over the last two decades, here's my "truth" as a single mom.

It’s the toughest and the most rewarding job in the world.

Believe in yourself, celebrate your strength, your resilience. You're going to need it.

We owe it to our children to be the best possible parent we can. They didn’t ask to be born.

It takes just ONE charismatic adult to raise a child.

Don’t let society dictate to you what a family consists of and what it doesn’t. A family is any configuration of people who live together and love one another.

Discipline your children. If homework isn’t done, grades slip, or trouble with the law, use it as a teachable moment - actions have consequences. Privileges will be taken away, punishment of some nature must follow. Children actively seek a strong parent. They don't want a buddy.

It's okay to make a mistake in judgment now and then.

Always tell him you love him.

Now as I grow older, I have begun to look to my sons to take care of me – small ways, here and there, incrementally creeping up like old age itself – going to the bank where we notarize the power of attorney papers; carrying the heavy cast iron base of the umbrella stand from the shed to the deck; cutting down branches of dying trees in the backyard.

Yet I always remind myself that no matter how old a child, he is still my child and he still seeks a parent, an older, wiser person he can lean on  . . . and if he wants, a shoulder to cry on, a place called home where he can be as vulnerable as he likes. His parent – his mother –  me . . . is, and always will be here to give him that for as long as I can.

I would love to hear about your journey as a mom or dad. Please feel free to join the conversation.