My mother used to say, “A woman president? What a terrible idea!” My mother felt men held more sway, their opinions carried more weight. I suspect, although can’t be certain, she would have applied the ‘b’ word to Hillary.

“I prefer the company of men to women,” she often said.

My mother didn’t choose the moment in history in which she had been born. And with time comes more understanding of my mother and her life.

With a cloud of dark hair cascading around her shoulders, large expressive brown eyes, and a slender figure that enhanced stylish dresses, Gertrude graduated at age sixteen from Germantown High School in Philadelphia. She met the boy next door – actually across the street. Dad courted her while he lived at home with his mother and attended the University of Pennsylvania. Following a two-year engagement, she became – at the age of twenty-three – his bride. Despite a fractious marriage punctuated by her husband's infidelity in midlife, she never took off the delicate silver wedding band my father slipped on her finger that June day in 1940.

At Christmas she sat down at the piano and played, “Oh Tannenbaum,” warbling in a soprano voice that wavered on the high notes. “I am proud to be German,” she announced afterwards, finishing off with a flourish of chords. 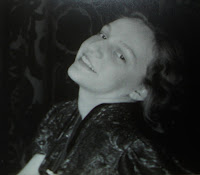 I remember the night Mother came home drunk from a party. My father looked at me. “I think your mother is out for the night.” Then he went upstairs.

I watched her dance around the living room like Isadora Duncan, hands fluttering in time to a melody only she could hear. Finally, she flopped down on the living room sofa and passed out in turquoise silk high heels and long raccoon coat, a rhinestone bracelet glinting on her thin wrist.

An insecure and anxious girl - a confession she readily made - her innocence found a connection with animals. Her first dog, a black cocker spaniel my father bought her when they were newlyweds named Charkie (short for Charcoal), vanished one afternoon shortly after my brother, Andy, was born. Mother believed Charkie had been stolen for medical research. The disappearance of her dog broke her fragile heart. A photograph of her in tweed winter coat with huge padded shoulders, her “baby" dog snuggled in her arms remained on her bedroom dresser for years, a symbol to me of love, loyalty and incurable sentimentality.

Mother demanded being the center of attention, especially with men. Men were the currency of self-worth. One night when I was about sixteen, she sat on the lap of her best friend’s husband and stroked his cheek, giggling, “Now Jack, what is that I feel pressing against my thigh. You bad boy!”

“Aw, Gerrude,” Jack said slurring out the ‘t’. His stubby hand held a cigarette and a tumbler of whiskey. “Why don’t you and I head upstairs?”

“Jack,” Mother chided in mock horror. “Maryann would never talk to me again.”

“Gertrude, you can have him. With pleasure,” Maryann said, slurring her words a bit and lighting another cigarette, her black Standard poodle Monsieur sprawled at her feet.

I wanted to crawl under a table and disappear. While his wife shamelessly flirted with another man, Dad remained his usual refrained, unruffled self. Dad had married a diva, a drama queen and he made the best of it. I’m sure he also knew Mother would never carry through with Jack. Years later when I caught myself flirting with a man while my husband sat in the room, I caught my breath.

Maryann was Mother’s best friend. The friendship revolved around a daily weekday morning phone conversation about hair appointments, cleaning house and gossip at the school where both their husbands worked.

“Maryann is so bored she’s dusting and vacuuming again,” Mother would tell my father after hanging up.

As she aged, the harder it got to manufacture dreams of happily-ever-after or foresee where it all went from here. Days revolved around bargain hunting at grocery stores, and Mother resorted to whatever means she could to be acknowledged.

The lovely brunette cut and dyed her hair a bright ash blond, flirted with the pharmacist who filled her prescription for anti-depressants and the butcher with the blood-stained apron who brought her the juiciest tenderloin steaks. A small, but meaningful triumph!

She adored my husband. “John is a doll,” she often said, as if I didn’t know this already. “And so talented,” she enthused because, unlike Dad, John knew how to cut a sheet of drywall, fix a broken fence. John redid their small family room in light wood paneling, replacing the “dark dreary,” paneling Mother hated.

When John danced with her on her 50th wedding anniversary and said, “Mom, you’re beautiful, I love you,” she literally bloomed in his arms.

My mother always had my lunches packed for school and fresh flowers on the table. The older I got, the more she said, "I love you, Susie. You're a good daughter."

And the older I get, the more I say, "Thank you, Mom. I love you. I understand."

How about you? Do you remember those moments  . . . the ties that bind you and your mother?
Posted by Susan G. Weidener at 7:58 AM