The Siren Song of Traditional Publishing 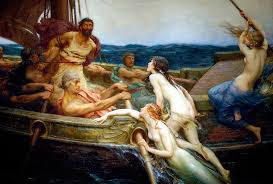 At a women's fiction writing conference this past weekend I sat on a panel of authors and agents talking about self-publishing versus traditional publishing. As an “indie” author (self-published is passé) I had over these last six years mostly given up trying to convince people that not all of us fail to hire editors or have a slew of bad reviews on Amazon. And that, yes, we can and do sell books and spin off satisfying side endeavors, including teaching and editing.

That said, traditional publishing is the siren song luring many with its enchanting call.

The women I spoke to at the conference wanted a publisher, although few seemed to know (or care) what that means in terms of marketing and bookstores or whether a small or large press mattered. Self-publishing was considered the final option. They just didn't want to deal with the work.

But it isn't just about the time and energy. It's about the validation that they're worthy which they believe traditional publishing bestows. For someone who spent over two decades in journalism where validation was often based on factors other than great writing, I encourage new writers to try the traditionally published route. If it doesn't happen, however, it's not a testament to their talents or their work. It's about the market. But at least they can say they tried.

The two agents on the panel stated that when it comes to shopping manuscripts around to publishing houses, at least for women’s fiction, the protagonist can’t be older than in her late 20s or mid-30s. One author in the audience piped up that she had made her protagonist younger (changed her from being in her 40s to her mid-30s) at her agent's direction.

For me, it was a reminder that agents and traditional publishers are interested in everyone except maybe older people and their stories; unless, of course, you’re an established literary icon like Francine Prose who got this glowing review in the New York Times for her latest novel, Mister Monkey, which is about people of all ages.

Agents, after all, are just trying to make a living and hope to discover the next The Girl on the Train or Gone Girl. As the oldest person sitting on the panel I realized how vulnerable we all are to what “sells” – and what supposedly doesn’t. There seemed little emphasis on the literary, although a nod was given to making sure you write “a good story” with “universal themes.”

(In A Portrait of Love and Honor, Ava is in her mid-40s. In a short story I wrote due out in November, the protagonist is nearing her 60th birthday.)

The conversation about publishing continued later in a workshop at this conference. The view among the writers was that hybrid or partnership publishing was, as one woman put it, “vanity publishing.” Paying to have your manuscript vetted and accepted by hybrid publishers didn’t appear to entice, although, the consolation, if any, is earning higher royalties, the woman said.

Interestingly, of all the published authors present at least half were self-published. As one woman about my age told me, “I’m at the age where I can’t wait years to see my book published.” But even she had come to pitch her new novel to an agent; maybe because it felt like the reason most people paid for the day-long writing conference was to pitch to agents and hold out the hope that they might find a traditional publisher.

After one would-be author returned from her pitch session, her deflation was obvious. We had spoken about her novel before she went in to pitch it and her enthusiasm was evident. She had spent years lovingly crafting a story about a mentally ill mother and her four daughters. By the end of her 15-minute pitch she came out of the room with shoulders slumped. The agent had deemed her novel “too emotional” without the necessary “hook” to “grab the reader right away.” (Plot-driven stories in women’s fiction are also what agents want.)

At the conclusion of a workshop I taught at the conference, the subject of publishing again came up. “I feel so overwhelmed,” a writer, who was probably in her early 40s, told me. “I have a friend who is self-publishing and when I hear her talk about all the work involved . . . " she sighed. "Yet when I walk into a library and see all these books and the people who have actually gotten their work published, I think . . . and then there’s me.”

I invited her to consider that writing is one of the hardest things in the world. Writing a bestselling novel is about as likely―or less―than being struck by lightning. What's important is getting the story out there for readers.

She nodded. “I have this story I need to write. It keeps me awake at night. If you’re writing to become rich and famous, that’s not a good reason.”

How about you? What experiences can you share on the path to publishing?