Writing My Difficult Past: By Joan Z. Rough 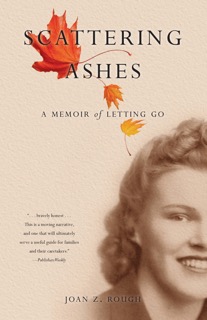 It is my pleasure to introduce memoir author Joan Z. Rough to the Women's Writing Circle. In this thoughtful essay, Joan writes of the healing journey that is memoir. Please welcome Joan. ~ Susan

When I began thinking about writing a memoir, I was just coming out of a long and arduous journey during which I cared for my mother during her last seven years of life. I knew writing about those years would be difficult. Yet I felt that the writing could be healing for me. At the same time I was also scared to death of reliving what had been one of the most grueling periods in my life. I was in deep emotional pain and was desperate to leave it all behind. Despite that, I decided to begin the writing and hope for the best.


Though I had been abused by both of my parents as a child, I was grateful for the moments when we connected as a family with love and compassion for one another. I began writing the happy stories. But when I started rehashing my life with the help of a therapist, the traumatic stories began pouring out. There were the beatings by my father, his PTSD from his experiences in WWII, my mother’s own childhood abuse, and her self-medication with alcohol.

Until then, I never realized that I was an abused child. Since many of the kids in my neighborhood were also thrashed by their parents when they “misbehaved,” I thought being whipped with a belt or a horse crop was normal. I didn’t know that the ceaseless moving from house to house that we did when I was a kid, was causing difficulties for me as an adult. Unlike other people I knew, I had no friends from way back when, and no one place that stood out for me as a childhood home. I felt unworthy of anyone’s attention and completely broken. I discovered my own PTSD and the reasons for the intense anxiety I lived with.

Finding the writing cathartic, I hired a writing coach who told me to simply write. We met every other week and talked about what I had written. As the stories poured out on paper and I continued talking with my therapist, there were moments of extraordinary clarity during which
I made startling discoveries. I realized that though my mother never laid a hand on me, I felt betrayed by her because whenever my father hit me or was in one of his crazy punishment moods, she would disappear, leaving me stranded in the company of an extremely cruel man, who had no idea of how children needed to be cared for. I bitched and carried on about how unfair life was, coming face to face with my anger, my victimhood, and my inability to choose another way to look at what I had experienced as a child and as a caretaker to my unmistakably narcissistic, and abusive mother. It was easy to blame those who had treated me badly.

When I found myself sobbing as I wrote or had bouts of depression, I took time off from the project. I enjoyed long walks, worked in my garden, and spent time doing other pleasurable things. When I returned to the work, I saw change.

Once I began understanding what was causing my pain and took time to work with it, it began to ebb. I joined a meditation group and began an extensive program of self-care that included weekly sessions of Yoga and Pilates. Slowly the broken pieces of my life began coming back together again as I rediscovered and accepted who I was. I took a trip back to Long Island, New York, where I grew up, and visited the numerous homes and towns I had lived in and found my inner child, still clinging tightly to the past, yearning to be rescued.

Things took a huge turn when I had my own run-in with cancer. But as the problem resolved, I realized I had a chance to start living my life over again, and decided to leave my victimhood behind.

It was the digging into the past and the writing that finally brought me peace and an acceptance of my parents and myself. Also came gratefulness, compassion, and forgiveness for my parents who were running from their own past and the pain they carried. As I’ve written in the epilogue of my memoir, “To be able to see my feelings appear on the screen in front of me, and then to watch them change over time as I rewrite, edit, and heal, is magical. It’s like being able to watch the day-by-day knitting together of a broken bone.”

How about you? Can you share your healing journey through writing?


Joan Z. Rough is a visual artist and writer. Her poetry has appeared in a variety of journals, and is included in Mariflo Stephens’ anthology, Some Say Tomato. Her first book, Australian Locker Hooking: A New Approach to a Traditional Craft, was published in 1980. Scattering Ashes, A Memoir of Letting Go was recently published by She Writes Press. She lives in Charlottesville, Virginia, with her husband, Bill, her two dogs, Sam and Max, and crazy cat Lilliput.