Traveling Through Ireland: Lessons in Writing and Poetry 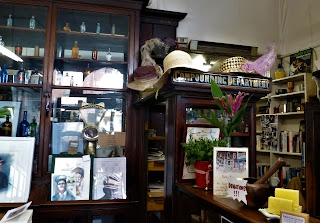 On my recent trip to Dublin we followed in the footsteps of James Joyce’s protagonist Leopold Bloom, past townhouses with colorful blue and red doors and window boxes brimming with purple and pink petunias.

For the writer, it is pure delight to wander Ireland where the likes of Oscar Wilde and George Bernard Shaw produced plays and poetry that changed the world.

Bram Stoker, an Irishman who attended Trinity College and the author of Dracula, found in Ireland’s mists and dramatically plunging seaside cliffs, the broodingly dark mood for his classic Gothic horror novel.

Around every corner and turn, Ireland offers a learning experience and lessons in writing and poetry in a land known for its storytellers and literary legacy.

Ireland, as I came to understand during my two-week visit there, is a place that deeply moves you, whether Irish or not, whether you're a writer or not.  From its rugged coastlines to its rolling hillsides flowering with white thistle and yellow gorse bushes ... its wild daffodils blooming in profusion on chartreuse meadows ... it’s magical.


James Joyce was a risk taker. Always seeking to challenge the literary conventions of the day and find  new expression (the popular term is stream of consciousness, although there is much more to his innovative work), Joyce was both rebel and outsider. Only by being outside and looking in could the author capture Dublin―indeed, Ireland―although he left in his early twenties for the continent of Europe, never to return.

I stopped at Sweny’s, the pharmacy Leopold Bloom frequented in Ulysses, tucked away on a narrow street near trendy bars and restaurants. It remains exactly as Joyce described it, although it is now a little museum of sorts, run by a nonprofit, near fashionable Merrion Square in Georgian Dublin, where writers and poets gathered during the Irish literary revival of the early 20th century.

At Sweny's, featuring sepia-toned photographs of Joyce, floppy brimmed hats worn by the ladies of the era, medicine jars, lemon-scented soap and second-hand books, daily readings by volunteers and aficionados of Joyce keep his words alive.


As writers we break barriers, challenge norms and take risks with how we craft and present our stories. Our voice, our take on the world and the memories we write are unique and, hopefully, universal. We play with point of view, often merging fiction and memory with imagination as we move from one character's perspective to the next. The people we have known and loved, detested and admired, take on a life of their own.

Joyce, along with Nobel Prize winner, the Irish poet WB Yeats, combined memoir and fiction … drawing from personal experience, the people they knew and the defining events of their lives and moments in Irish history.

Yeats wrote often about the supernatural, the fairies that came to him in dreams and his quest to understand the nature of life and death. In one of his most famous poems "The Wild Swans at Coole", he sees them and the Irish countryside again:

The trees are in their autumn beauty,
The woodland paths are dry,
Under the October twilight the water
Mirrors a still sky;
Upon the brimming water among the stones
Are nine-and-fifty swans.

***
As for women, one often stands out during the Irish literary revival. Her name is Lady Augusta Gregory. A poet in her own right and a wealthy widow, she mentored Yeats and other artists of the day, who gathered at her country estate at Coole Park in County Galway. Her importance as a purveyor of the arts cannot be underestimated.

She wrote of marriage:

(The history of women in Ireland is one fraught with struggle and a lack of equal rights … a story for another day.)

We visited with writer Deirdre Ni Chinneide who offers spiritual retreats in Ireland and America. She lives on Inis Mor. “Let the land speak to you … and leave something of yourself behind,” she suggested to our group of travelers.

Inis Mor, which means ‘the largest island’ in Irish, is part of the Aran Islands and is steeped in Celtic heritage. It was here monks escaped persecution in the 7th and 8th centuries. Sheep, cows, horses, stone barns and Celtic ruins draw in the traveler, provide moments of deep reflection for the writer in the isolation that is Inis Mor.

Ultimately, this is the great secret of travel. You can’t help but leave something of yourself behind. Travel pulls you in and you feel the connectedness of us all. As a writer, a poet, an artist, you find new material, are exposed to new ways of writing and creating.

You have passed this way and may never come again. So, if you're like me, you leave a piece of yourself there, but you also take with you a memory, a moment, a realization. You craft this into a story, a poem, a blog post, a way to live and traverse the world and share through the power of words.

NOTE: This tour of Ireland was organized by Road Scholar.


How about you? Can you share a memory of a journey that touched and moved you and helped you craft a story or poem or find a new way of looking at the world?
Posted by Susan G. Weidener at 7:51 AM