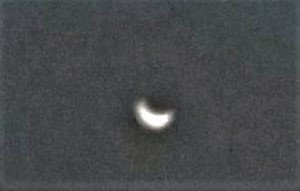 So. The Great American Solar Eclipse is history. For one brief shining moment―or two minutes―people came together in the glare, or rather, the darkness of a celestial phenomenon, at least, if you were lucky enough to obtain special glasses and be in the path of totality.

If I never hear the “path of totality” again it will be too soon. Leave it to some to turn a splendid show of science and the universe into a field day for people gouging others. Trying to get a pair of solar eclipse glasses became like the quest for the Holy Grail ... unless you wanted to pay $299 on Amazon.

Instead, with two pieces of white paper, a pinhole prick and a scrap of tinfoil, this humble little view of the eclipse emerged for me ... and it was pretty cool. My son reported seeing it with the naked eye through the tinted glass of the bank where he works and texted his photo to me.

As the great event began and journeyed to its conclusion, it struck me that while a few interviewed on CNN talked about “a spiritual journey,” no one mentioned that three-letter word. I guess God doesn’t figure into this.

Which got me thinking about transformational journeys. If we have the guts and the fortitude to write our stories, we’ve left our own little indelible mark on the universe, haven't we? Who knows? If our story touches a chord, and most well-written stories do, it might even change a life or two or three for the better.
This past week I met someone who told me how her friend became hysterical at a funeral. Without going into details, suffice to say that when the person discovered that the loved one was dying of cancer, her anger obscured her grief and she took it out on him. At his funeral, her guilt washed over her with a tidal wave of recrimination and tears. “Here, share this with your friend. I think it might help her realize she’s not alone,” I said handing the person a copy of Again in a Heartbeat.

As the eclipse demonstrates, we’re all pretty insignificant in the greater scheme of things. We need to―and I’m including myself here―stop taking ourselves so seriously. In two hundred years or so when the moon again shadows the sun on its endless and eternal orbit here in America, we’ll be long gone and no one will care what so and so thought of us.

Isn’t that the writer’s purpose? To take the longer view? To step back from the personal and focus on the universal? To shed light in the darkness and move beyond any fear that someone or other might be offended by our story?

If fear of offending those in your orbit is the overriding factor, write a novel or a feel-good script for the Hallmark Channel, which is apparently enjoying boffo ratings in the era of Trump. That way, at least, you can have fun with the story, change the names, the places, gear conversations the way you want without worrying ... and hop on the sofa with your dog or cat and disappear into the fantasy ether.

No more hesitation; no more equivocation that “what I write isn’t good enough.”

Enjoy the moment of knowing that you’ve had the guts and fortitude to step onto the blank page and share it with the cosmos.

Be happy with your own humble little journey.

Keep comfort in the knowledge that others have come before you and others will come after you with their stories, which may be remarkably similar to yours because we all travel the same human journey.

Remember the Divine and give praise.
Posted by Susan G. Weidener at 8:46 AM