The Land of Pura Vida...Rainforests, Monkeys and Birds 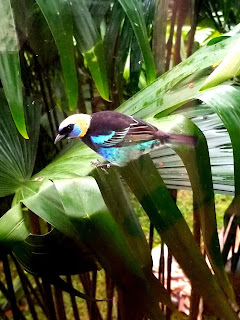 In Tortuguero, Costa Rica, a howler monkey dangles from a tree, its long hairy arm and fingers outstretched. A boy excitedly runs up to the monkey. He tries petting it, offering it food. Our tour guide barks, “They are not for petting! They are not here for your amusement.” I think he is not as concerned that the monkey might do the boy harm, as much as outraged that a monkey dangling from a tree entices people to treat it like a house pet.


Can you blame the boy, or the monkeys, for that matter? Tourism has cut through the heart of their rainforest home where their eerie howling resembles the soundtrack from Jurassic Park. It begins at 4:30 a.m., when the monkeys wake. It continues until they sleep twelve hours later.

Past the lodges and down by the illuminated pool and straw-thatched bar, reggae music blares from stereo speakers. The incessant hum of cicadas and chorus of bird calls are drowned out by Bob Marley singing, "Don't worry be happy."

Under night skies, the Caribbean surf pounds like the earth's heartbeat. A full moon floats over the river leading to the breakers and beyond. You find yourself thinking about your faith, about your beliefs. 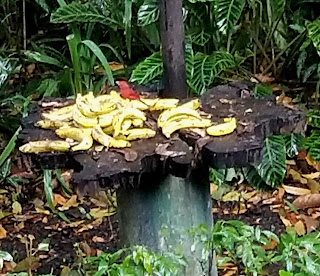 Over in Sarapiqui, another stop along the rainforest eco-tourism trail, tanagers of all stripes and colors feast on bananas from a pedestal below the hotel balcony where tourists drink coffee and eat pastry. With binoculars we flock to watch the birds, hone in on gold heads and beaks, bright scarlet, orange and turquoise breasts ... 'oohing and aahing' from the balcony of a multi-million-dollar lodge.

When you travel to the rainforest, interconnectedness transcends everything else. How can it not? There's a sense we're all in this together—man and wildlife, flora and fauna. The basilisk perfectly garbed in camouflage on a fallen tree limb lounges near the red and green poisonous frog silhouetted within a scoop of rock puddle.

You ponder the legacy of the ancient chilamate tree, wide enough at the base to stand inside. The ghosts of Columbus and conquistadors walk these same forests. 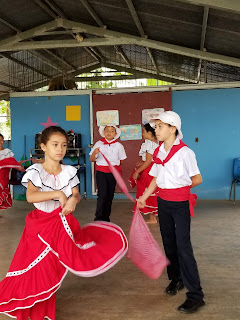 A visit to a school in the rainforest is part of the tour. The principal says Costa Rica is committed to educating children about sustainability and stewardship. Families grow everything they need from rice and beans to bananas and pineapple. The children dance and sing. Their teacher sells jewelry, displayed on a table by the schoolyard. I buy colorful earrings in the shape of a lizard. 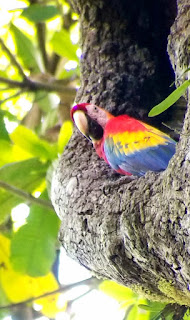 At one stop, we encounter a road closure. Two hours later we stand in the blistering heat and humidity. Local residents have formed a human blockade to prevent tour buses from passing to the road that leads to the canal boat, leading to the rainforest and the howler monkeys. A mini-uprising. The people protest the huge potholes heavy vehicles have pitted in their road.


As much as coffee and bananas, the economy is driven by tourism. This sets Costa Rica apart from its neighbors, Nicaragua and Guatemala, we are told.

Eco-tourism is big business. This by necessity forces the individual to consider his or her responsibility to the planet, the wildlife.

How long before vistas of cloud forests and volcanoes, hibiscus, morning glories and bougainvillea become but a memory lost to the gods of profit...of selling the magical through $35 binoculars? The size of West Virginia, Costa Rica is inundated with three million tourists a year—one million of them from the United States. 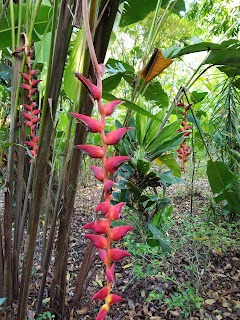 The rainforest is fragile. A howler monkey dangles from a tree. 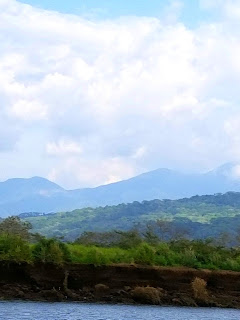 I am pleased that you were able to exchange harsh winter weather of the Northeast for this tropical paradise. Thank you for reminding us of the fragility of our planet's ecosystem. I need a change, but I suspect it won't happen any time soon.

Thank you, Marian. Visiting the rainforest is a life-changing experience, especially for me, a writer, who often spends her time in bookstores and libraries or traveling literary tours, not "up close and personal" with the interconnectedness of all that makes our planet so magical and fragile. I do remember visiting the rainforests and jungles of Australia, New Zealand and Nepal, but this trip was an especially in-depth look at Costa Rican rainforests and the eco-tourism business. I am sure you are hard at work on getting your memoir ready for publication. Perhaps, afterwards, you can get away.

Susan, it sounds like you had a wonderful getaway. I too enjoy the experience of connectedness to nature it all of its forms. Your vivid descriptions of the flora and fauna you encountered are inspiring and engaging. It would be a tragic irony to lose all of this because it is so beautiful.

Marilyn, I agree. We find so much in nature that is spiritual and meaningful. It would be tragic if tourism, meant to educate people about stewardship and sustainability, had detrimental outcomes for the wildlife. That is not the goal, of course. Let's hope good choices save the ecology.