Pharaohs and Gods: A Writer Travels to Ancient Egypt 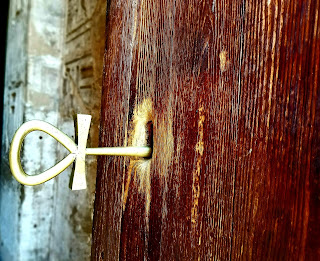 The heat is overwhelming. Dry heat. Desert heat. You round a bend in the dusty, bleached-white path. A turquoise oasis under blistering sun beckons—Lake Nasser. To the left on the bank above the lake, it must be a mirage...until you realize this is Abu Simbel—the temple of Ramesses II. Hands on knees, the pharaoh's impenetrable gaze is eternally fixed on the lake and the Nile River, his curled beard symbolic that he has passed from this world onto the next.


Pharaohs and gods. Ancient Egyptian temples and tombs hold unimaginable treasures preserved by the dry heat, the sand, the stone. Incense, myrrh, weapons, silver and gold, offered to the cults of the gods. Walls are inscribed with hieroglyphics, paintings of human-headed snakes and helmeted warriors marching in step. Isis, holding an ankh—the key of life—Osiris, the god of the underworld in profile, Hathour, the goddess who took the form of a woman with cow’s head, two horns and solar disc. A strange, majestic tomb built in the desert over three thousand years ago, Abu Simbel is one man’s quest for immortality. His desperate hope never to be forgotten. 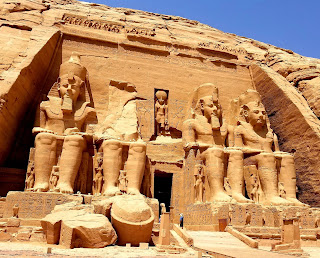 Maybe this is why I travel. Not just to learn about other cultures, but accept, embrace, how my own life fits into this inglorious story of existence, of history through the ages. Maybe it is to feel at one with the human experience, to move on to the final chapter. Pharaoh or plebeian, slave or master, I suppose we’re all seeking something beyond ourselves, some meaning under the sun and the moon and the stars.

The ancient Egyptians brought these massive concrete edifices by wooden boat; they carved thrones and statues into sandstone hillsides, an impossibility that some joke must have been the work of aliens. Or maybe God, for how else could something this magnificent exist? A realist knows that slaves performed the backbreaking work, but what—who—made it happen? 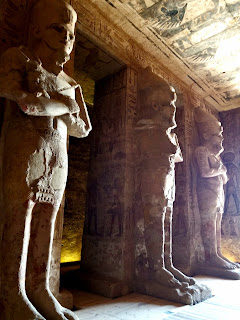 Preparation for the afterlife meant removing the stomach, the liver, the intestines and the brain, which wasn’t considered as important as the heart. They kept the heart, wrapped it with amulets and placed it back in the body before the corpse was mummified. Hearts were necessary in the afterlife. Brains, not so much.

A few days later, I visit the Valley of the Kings in Luxor, once known as Thebes. In 1922 Englishman Howard Carter unearthed the world’s great treasure—the tomb of King Tut. I enter Tut’s tomb. There lies the nineteen or twenty-year-old whose cause of death spawned numerous theories from malaria to a chariot accident—his mummified corpse covered in white; shriveled brown toes and face revealed. The young boy king is surrounded by stories, told in engravings and in hieroglyphics on the walls, the ceilings...stories that reflect the life he lived, the search for the meaning of the journey. I feel this way about stories, too. My books are my little legacy, my own simple stab at immortality. I write, therefore I am. 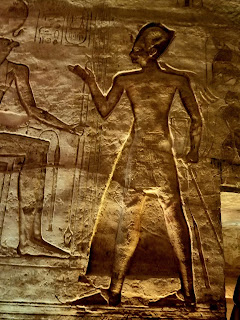 One traveler angles to get a close-up shot with her cellphone of Tut’s face. He’s dead, so what’s the point? There is no beauty in death on display. Only a sort of morbid fascination. This was once a living, breathing person. We see the body, but what of the spirit? Where does it go? 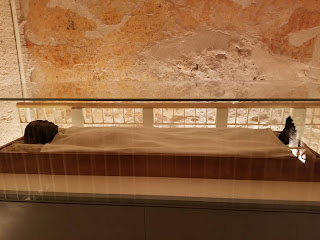 Monuments built to narcissistic grandiosity. To questions impossible to answer. Whatever. I am lucky to have traveled here before I die. To write this. To ponder my own life, my own story, to think about where I go from here, but mostly to be in the moment—in the presence of something strange, something great under a scorching September sun. 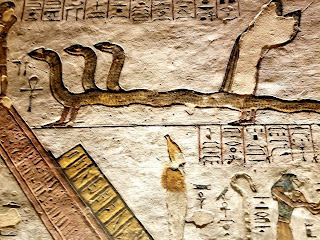