Anyone who knows me knows I have long been an ardent supporter and advocate of Hillary Rodham Clinton. In the spring of 2008, while she was vying for the nomination against Barack Obama, I saw Hillary when she campaigned in West Chester, Pennsylvania. I remember thinking how petite she was clad in a white suit…how beautiful and articulate and well-spoken. Like the rest of the crowd, I gave her a standing ovation, not once, but several times. When she became the Democratic nominee in Philadelphia in 2016, I felt, at long last…at long last. I even worked phone banks for her and heard Chelsea speak in West Chester.

Reliving the 2016 election, even now, leaves me feeling something akin to grief, of what might have been―our first woman president. Usually, I can’t read about the election, even Hillary’s own retelling in What Happened. It’s too upsetting, made more raw as the 2020 election looms and once again a man is at the top of the ticket. But pandemic summer left me the time to read Rodham, Curtis Sittenfeld’s fictionalized account of Hillary’s life.

The ‘Hillary’ in Rodham is much like I imagine her: strong, logical, emotionally intelligent in every way…except when it comes to Bill Clinton.

My favorite scene in the novel takes place in 2005. After Hillary has turned down Clinton’s three marriage proposals and understood that he is a sexual predator and, by his own admission, a man unable to remain faithful, she has struck out on her own and been elected Senator from Illinois.

Now in her late fifties, she accepts his dinner invitation. He is twice divorced in Sittenfeld’s telling, a tech billionaire living in San Francisco.

Laying out her best lacy underwear, Hillary imagines having sex with him again, even nurturing hopes that maybe, just maybe, she could chuck all her political aspirations―by now she has waged one unsuccessful bid for the presidency―and settle down with her self-described soulmate. As she enters Clinton’s luxurious apartment with a stunning view of the San Francisco Bay and he makes them dinner―he is now a vegan―she again feels the chemistry, the charisma that is undeniably his and which no man, before or since, has equaled.

As they sip red wine and she basks in how handsome he looks, without warning, Clinton goes off about another woman, a woman he even considers having a child with, a woman who is young, a woman who, like all the women Bill Clinton ‘dates’, is under the age of forty. It’s as if Hillary is merely an audience for his narcissism, his complete lack of empathy for what they once had as law school students and her decision to follow him to Arkansas. It is here she unleashes on him, calling him not just a narcissist, but a "spoiled, selfish child." This is the Hillary that perhaps many of us wanted, or the Hillary that Sittenfeld, a writer of fiction, crafted to give her protagonist that hook that so many strong and intelligent women could identify with―loving, and, eventually, leaving a narcissist, albeit one who haunts their dreams for years afterward because in some twisted way he understood them.

"You know," I said, "if you're trying to humiliate me, I am ashamed of myself. But not for thinking you'd find me attractive. I'm ashamed because you've given me so much evidence for so many years about what a piece of shit you are, and once again, I ignored it."

In Sittenfeld’s telling of Hillary, she is a woman alone in a man's world, a woman whose love of politics and making a difference in the lives of many, results in becoming what she calls “an honorary man.” Except for Bill Clinton, Hillary is deemed by most men too “opinionated for a girl” a phrase that rings true for many of us who heard this and whose sexuality was diminished for going toe-to-toe with a man. Hillary dates, but the price of her ambition and her smarts is that in Rodham, she never marries and remains childless.

As a writer of fiction, as well as memoir, I found it fascinating that Sittenfeld created her own Hillary out of the myriad books written about her life, as well as Hillary’s own memoirs. But surely, even this technique, while based in research, this melding of fact and fiction, strains credulity of an iconic figure whose life is so well known that a fantastic revamping of her story feels unsettling, at least to this reader.

Sittenfeld’s earlier novel American Wife, based on Laura Bush, was a fun read because her name had been changed, and there was a modicum of detachment from the real Laura Bush. While I have no problem with writers “breaking the rules of writing," I was a bit nonplussed throughout the reading of the 492-page Rodham, with twisting history, right down to Bill Clinton running against Hillary in 2016 and people screaming “Shut her up!” at his rallies. (Is there no difference between Trump and Clinton?)

"Sexism claims were considered sour grapes…yet was this not the starkest proof?" Hillary muses of the chant. She even calls Clinton and asks him to make his supporters stop. A cutthroat politician and perhaps even a Hillary-hater, himself, he refuses.

Written in first person, Rodham channels Hillary in a way that felt, at least to me, real. Sittenfeld is a clever writer. Of the press, the fictional Hillary thinks: They constructed elaborate narratives based on scant evidence. They were also self-righteous and self-congratulatory...they assumed that in other fields, they could make salaries many times what they currently earned, but they believed journalism was a noble calling. Hillary goes on that while many don’t bathe for days on the campaign trail, they delight in picking apart her looks.
This version of the Hillary who never married Bill Clinton leaves us wondering if she might have found her voice long before the 2016 election? Reading interviews with Sittenfeld after the novel was published this spring, I noticed that Sittenfeld admits she never met Hillary and probably doesn’t ever expect to. What?

An appearance by Donald Trump at the end of the novel strains credulity. Although Sittenfeld presents him as a pompous buffoon with his own undeniable brand of charisma, her decision to make Trump a supporter of Hillary for President in the 2016 campaign borders on annoying and ludicrous. Trump is also a sexual predator, but as Hillary notes, people, even women, shrug and say they, “don’t care.” How true! But it is the cruelty with which Sittenfeld depicts Bill Clinton as a predator and narcissist that most disturbed me. We all know how Gloria Steinem once observed that the Clintons had a strong marriage because they were truly help mates with each other…that he should be so despised and vilified by the fictional Hillary at the end of the novel felt like another disrespectful treatise on the real Hillary’s decision to stay with her husband.

In reading about Sittenfeld and her process in writing Rodham, it struck me that maybe this was the author's way of coming to terms with her grief about 2016 and the woman who would be president...one who now remains a stark reminder of pervasive sexism in both men and women.

As Rodham confesses about her desire to be president:

No man has run because he hoped to gain entry to the highest office of power on behalf of an entire gender. Women and girls were half of the population and we deserved, as a basic human right and a means of ensuring justice, to be equally represented in our government. Yes, I was me, Hillary, but I was also a vessel and a proxy. 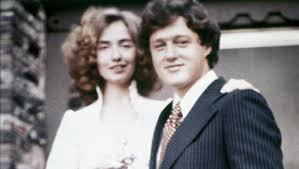 Susan, Thank you for your discussion of Curtis Sittenfeld’s novel Rodham. I have always liked and admired Hillary, and was extremely disappointed that she would not be our first woman president. I think she is strong and intelligent, and I hope that she inspires other young women to follow in her footsteps.

I have no doubt she will inspire young women and one day one of them will shatter that highest glass ceiling. Thanks for commenting, Marilyn.