A Woman Alone in 'Where the Crawdads Sing'


The premise of a girl living alone in the marshes along a North Carolina seaside town didn't motivate me to want to read Where the Crawdads Sing. Then, like many, with pandemic life upon us and ample time to read, after weeks of being on the wait list I was able to borrow it through the library. I wanted to understand how one book, a first novel written by a woman in her late sixties, had remained on the bestseller list for over a year. Now I know. 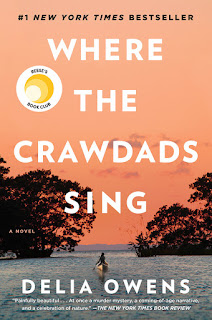 I found the novel a surprisingly beautiful read. The evocative descriptions Delia Owens, an award-winning nature writer, entwines throughout every scene envelops the reader. The intricate and programmed dance of nature and its species, including us humans, makes for an educational and moving page turner. This description, for example, of hummingbirds offers spiritual moments: “Ordinary light is shattered by microscopic prisms in the feathers of hummingbirds, creating the iridescence of its golden-red throat."

While the plot never could have worked in the present day due to the Internet and the ability to Google people and learn their whereabouts, it was a relief to be taken back to a simpler time. Owens sets her story in the 1950s and 1960s. Kya, the main character, has been abandoned by her parents and siblings and learns to live alone, first as a child then a young woman. The unfolding tale of a woman whose constant companion, other than birds and tidal rhythms, is loneliness was poignant and timely.
Despised by the people of her village as “marsh trash”, except for Jumpin’ Jack and Mabel, who live in “colored town,” Kya confronts deep-seated discrimination and shunning. Her one friend, Tate, the man she comes to love, but who betrays her trust, teaches her to read and mentors her growing talent to understand, paint and write of the marsh.


The plot centers around an unsolved murder of the town’s football hero, Chase Andrews, which the Marsh Girl is ultimately accused of committing. Here’s where every woman can identify with the ‘heart is a lonely hunter’ theme of loneliness and longing for romance and love. Too bad that Chase is a liar and a womanizer, especially when he runs into a formidable female like Kya who he uses and then casts aside as so much trash. Whether he loves her or is merely infatuated with her, is not the point. She's not ever going to be allowed into his inner circle of  'respectable' society. The reader is tipped off early that this is a woman’s story of revenge when Owens writes about the female firefly’s changing signals given to the male firefly, first to lure them in and then eat them. “The females got what they wanted—first a mate, then a meal—just by changing their signals.”

The author has more to say about men and their nature. She writes of the alpha males and the weaker males who linger around the edges hoping for the scraps (females) he leaves behind. In the case of bullfrogs, “they parade their smaller forms around in pumped-up postures or shout frequently—even if in shrill voices ... pint-sized bullfrogs in the grass hide near an alpha male who is croaking with great gusto to call in mates. By relying on pretense and false signals, they manage to grab a copulation here or there.”

Of the male peacock, Owens writes: “Over eons of time, the males’ feathers got larger and larger to attract females, till the point the males can barely lift off the ground. Can’t hardly fly anymore.”  The narcissism of the male is unmistakable.

The ending to Where the Crawdads Sing is unsurprising considering what we know about Kya. She is the wildest of the wild ... of that place where the crawdads sing. The story couldn’t have ended any other way since this novel is ultimately, at least to this reader, tribute to a woman alone. A  woman scorned, who treads carefully after rejection and abandonment, a woman who is no man’s fool, who takes no prisoners in her quest to survive. It is what it is. “Judgement,” the author writes, “had no place here. Evil was not in play, just life pulsing on, even at the expense of some of the players. Biology sees right and wrong as the same color in different light.”
Posted by Susan G. Weidener at 11:09 AM

Wonderful review, Susan. I don't read much fiction but I'm now going to add this to my list...

Thank you. Hope you enjoy it as much as I did.

Lovely review of an absolutely beautifully written novel, Susan. I enjoyed this book very much.

Thank you for reminding me about this book. I learned of it from a friend some time ago, and added it to my long list of books to acquire and read. Your enjoyable review prompted me to go straight to the library and borrow it. It is on my night stand now.

You're welcome, Marilyn. Glad you were quickly nab a hard copy from the library. As I mentioned here, I waited weeks to borrow it through the library's Kindle books. Hope you enjoy it as much as I did.