My Grandmother and Strong Women as Role Models 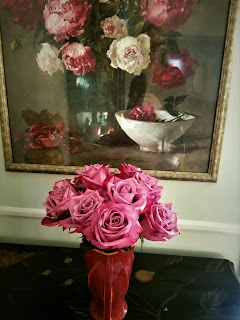 I knew her as Nanny, that most British of words for grandmother. She immigrated to Pennsylvania from Manchester, England in the early 20th century. I have no diaries, no records, just sepia-toned photographs of a woman with pale brown hair, ebony beads and eyes which remind me of my own.
This week I encourage you to remember and write about that strong woman in your life, the woman who made a difference in who you are today. Maybe read your story and hers to another, share it together.
For me, one woman comes to mind. My grandmother, Annie Beatrice Dean Weidener. Her influence was indirect. She died when I was five. But I know this. Nanny defied expectations, a woman fearless enough to cross a vast ocean and start a new life in Pennsylvania, whose wooded green spaces reminded her of England. She was the influence who made my father a man who believed that a woman could, and should, have every right to success as a man. She is the reason, as the daughter of an enlightened father, I married a man who believed in me and loved me unconditionally—who boasted about my accomplishments to anyone who would listen and encouraged me to be strong. I never could have married any less of a man than John.
Role models offer a template for accomplishment, fortitude and bravery. Through my work as a journalist and writing teacher and author, I've met many strong women. Women who ran school districts, wrote books and traveled extensively to help the poor, the disenfranchised. I interviewed the first woman ordained as an Episcopal priest ... a grieving mother who started a nonprofit after the death of her child from a rare disease. Role models shape us in a way that we, too, can become role models.
Maybe Nanny was proof to me, in my own family, that woman can defy the odds, or, perhaps, as her only granddaughter, I romanticize her story. I view my grandmother as an early-day feminist, supporting herself and running a small business. Although I grew up in an era where women would not see the passage of the Equal Rights Amendment and would endure the defeat of the most experienced presidential candidate in modern history because she was a woman, I see progress. Against the roar of a thousand voices saying ‘no’ and an even louder roar saying ‘yes’, we have a female vice president.
Nanny married my grandfather Andrew Weidener and bore her only child, a son, my father, also named Andrew. I vaguely remember her brick twin house on Maplewood Avenue in the Germantown section of Philadelphia ... the lace doilies on the pie-crust mahogany table in her sitting room with a view of rhododendron and azaleas. In my mind’s eyes, I see china tea cups decorated with roses and a tabby cat purring on the windowsill. She crossed the Atlantic with her aunt, a woman who never married. Her name was Mary and she also helped raise my father.
My grandfather, Nanny’s husband, traveled as a salesman and left home for long stretches. Stress and cigarettes killed him at fifty-nine. Nanny raised her son and after her husband died took in boarders. She had to earn a living. She taught my father to believe that a woman can survive on her own; a lesson he bequeathed to me. 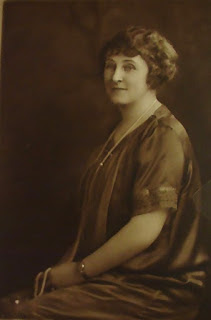 As a final postscript: When Nanny was about to come and live with my parents, she met a man named Jones, a widower, who lived on Maplewood Avenue. She was seventy-four. He courted her. He proposed. She said 'yes'. Shortly after they announced their engagement, my grandmother was diagnosed with terminal cancer. Dad held her hand when she died.
When people ask if there is one person you could have dinner with—living or dead—I think of Nanny. Had she found happiness with Mr. Jones or was she simply tired of being alone? Had she, against all the odds, discovered love right around the corner, a companion to admire and comfort her in old age? I imagine us laughing about life and love and the trials and triumphs of widowhood, sipping lemon-flavored tea in rose teacups, her cats purring on the windowsill in the house on Maplewood Avenue.

How about you? Can you share a memory of a female role model, a strong woman who helped shape you?
Posted by Susan G. Weidener at 7:38 AM

Dear Susan, thank you for sharing your Nanny with us. Although she died when you were five, I love how you show her character snd strength in your own father and yourself. Such a lovely reflection and picture. I am amazed at the resilience of that generation. I think my own strong woman role model is my Aunt Rose who brought up five children alone while her ex-husband gallavanted around with other women. She showed me what strength and grace looked like. And I loved her sense of humor!

Hi Kathy, Well said that that generation of women faced so many challenges that women today can only imagine. I heard a similar story from your Aunt Rose's when a friend told me her grandmother, pregnant when her husband traveled to America, waited for word. He said he would send money back to her in Italy and get her passage to America, but she waited for years, while he did who knows what. Your Aunt Rose sounds like a true heroine. How wonderful it would be to sit down with women like her and my Nanny and share their journeys. Meanwhile, I wonder their reaction to know that it took 100 years after we got the right to vote to finally have a woman as vice president.

Oh how I would love to get Nanny and Aunt Rose together to share their stories and show how far we’ve come with a female VP.

What a lovely memory, Susan! Thanks for writing and sharing this. I am thinking of my cousin Pat who started a restaurant with her husband, ran it after his death with their children, who now carry on the tradition. She was stronger than her husband, in a quiet way, and was like a big sister to me.
These women we remember saw a lot of history as they were living it. May we carry on their courage and spirit.

Hi Linda. Great to hear from you. Your cousin sounds like a wonderful woman who served as a template of courage and strength for her family. And a friend to you. I love the 'big sister' analogy. Thank you for sharing her story.

Susan, I'm catching up on reading this Sunday afternoon. Your post about your Nanny is beautifully written and powerful in her example to your father. The woman who comes to my mind is a cousin on my father's side. Jean was the only child born to my dad's sister. During WWII, Jean's husband was killed leaving her with two young daughters. She didn't hesitate to take on a job at McDill Air Force Base in Tampa, where she lived with her parents and her two girls. She saw that both girls have all their needs, including college educations. Her greatest joy was her grandchildren.

My dad left an orphanage when he was 16 not knowing where his siblings had gone when they moved away. When I was 12, he located his sister living in Tampa. We made a trip to her home and at age 12, I met my cousin, who was a bit older than me, and her two daughters who were by this time working women. Over the years, Jean and I corresponded and she always encouraged me in so many ways to be the woman I am today. She saw me through a divorce, single parenting a son, and marriage to Bob and becoming a stepmom. Jean lived a long life. She died in 2017 at age 103. I am so thankful to have had Jean in my life.

Dear Sherrey, Have you ever thought of writing a short story or a novel with Jean as the main character? It almost sounds like a Netflix original with you narrating and using your dad's history and the orphanage as backstory in his search to find his sister. Thank you for sharing Jean's life and her bravery and fortitude, here in the Women's Writing Circle. So uplifting.